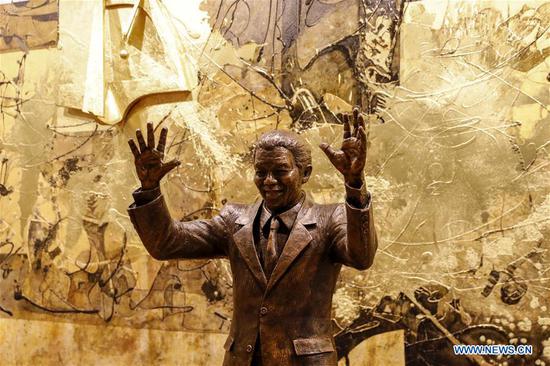 Photo taken on Sept 24, 2018 shows a statue of Nelson Mandela at the United Nations headquarters in New York. (Photo/Xinhua)

A statue of Nelson Mandela was unveiled at the UN headquarters Monday to honor the 100th anniversary of the late South African president's birth.

His fight against apartheid "marks a landmark in human rights and freedom," the UN chief added, thanking the South African government for donating the statue.

A high-level meeting, the Mandala Peace Summit, was scheduled for Monday at the UN for world leaders to renew their commitment to global peace, conflict prevention, conflict resolution, peace building, promotion and protection of human rights and long-term development initiatives.

The UN member states decided in December 2017 to hold the meeting to mark the 100th anniversary of Mandela's birth.

Mandela was born in July 1918 and died five years ago due to a respiratory infection. He was imprisoned for 27 years for his role in the fight against apartheid and became the first black president of South Africa.