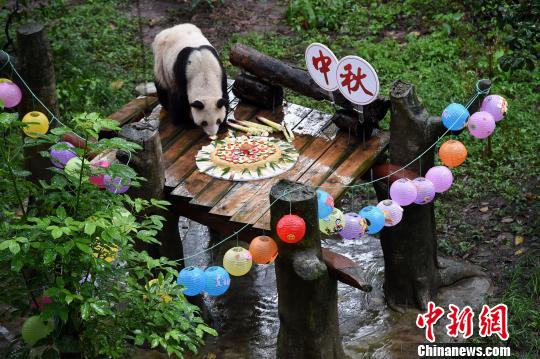 One of the world's oldest captive giant panda alive today, Xin Xing, enjoyed her feast, a mooncake with fruits and bamboo shoots on its top, at Mid-Autumn Festival in southwest China's Chongqing Municipality.

The mooncake was a special present from Chongqing Zoo and some panda lovers in the municipality, made from rice, eggs, soybeans and seasonings including salt and vegetable oil.

In the morning, the zoo staff decorated her house with lanterns and served the giant panda a mooncake with her favorite bamboo shoots and sliced apples, cucumbers and pitayas as the icing.

Born in 1982 in Baoxing County, southwest China's Sichuan Province, Xin Xing is a 36-year-old mother panda to six cubs, equivalent to more than 100 human years. She is also the grandmother of a male panda Bili at Ueno Zoological Park in Japan, named Ri Ri in Japanese, said the Chongqing Zoo.

The festival, falling on the 15th day of the eighth month on Chinese lunar calendar, is a major occasion for family reunions in China, with the tradition of enjoying the full moon and eating mooncakes.