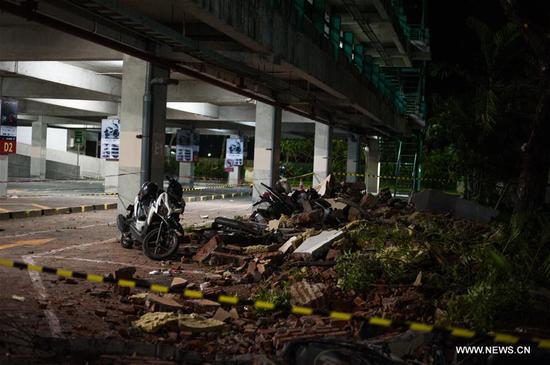 Photo taken on Aug. 5, 2018 shows the rubble at a parking lot after an earthquake in Badung Regency, Bali, Indonesia. (Xinhua/Muhammad Fauzi Chaniago)

At least 82 people were killed and hundreds of others wounded as Sunday's 7.0 magnitude quake destroyed thousands of houses and buildings mostly in Lombok Island of central Indonesia, a government official said Monday.

"The injured are being treated outside hospitals or health clinics as the buildings of health facilities damaged or are in unsafe condition," the spokesman told Xinhua in a text message.

"Most of the victims were hit by debris and falling blocks of concrete," he said.

The quake triggered panic in the island and nearby Bali island as well as East Java province and people rushed out of homes and buildings, said Sutopo.

Evacuation and rescue for the victims were underway in the dark, but the efforts were hampered by poor communication access which was disturbed after the quake, he added.

By far, a total of 47 aftershocks followed the 7.0-magnitude shock which struck at 18:46 p.m. Jakarta time (1146 GMT) with the epicenter at 18 km northwest Lombok Timur district and shallow of 15 km under-earth, official of the meteorology and geophysics agency, Yusuf Khaidar Ali, told Xinhua over phone.

The tremblor was also felt strongly in nearby Bali Island and East Java province, and some damages were found in the island, including a mall shopping center and buildings, according to Sutopo.

The meteorology agency issued a tsunami warning, and the tsunami only occurred with height of below 13 cm in three spots in Lombok Island, Biana Rahayu, official at the agency, told Xinhua.

A week ago, on July 29, Lombok Island was struck by a 6.4 magnitude quake, leaving 17 people dead, 365 of others injured and 8,871 people displaced as the jolts destroyed 14,940 houses, according to the disaster agency.

The quake also cut off escape routes in a mountain, a favorite tourist destination, trapping over 1,000 foreign and domestic tourists, fortunately all of them were rescued, it said.

Indonesia is prone to quake as it lies on a vulnerable quake-hit zone -- "the Pacific Ring of Fire."