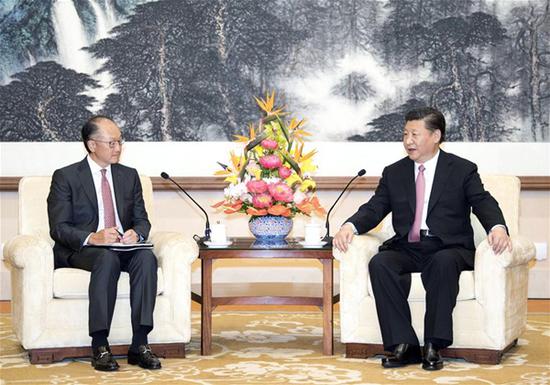 Hailing the sound long-term cooperation between China and the World Bank, Xi said China appreciated the World Bank for supporting the Belt and Road Initiative, promoting capital increase and shareholding reforms in recent years, and improving the representation and voting power of emerging markets and developing countries, including China.

"The World Bank is an important force in safeguarding multilateralism and economic globalization," Xi said. "China is willing to deepen global development partnership with the World Bank, strengthen trade liberalization and facilitation, jointly promote global poverty alleviation and sustainable development, safeguard an open world economy and build a community of a shared future for humanity."

The world today is a global village. Despite the constant appearance of unilateralism and protectionism, the blended interests and shared destiny of different countries and economic globalization are irresistable, and win-win cooperation represents the general trend, Xi stressed.

"China's development has benefited from economic globalization and trade liberalization, and contributed greatly to global economic growth as well, " said Xi. "We oppose the false accusations against China and will firmly safeguard its legitimate interests."

As a responsible major country, the builder and contributor to the current international system, China will unswervingly support the improvement of the multilateral trade system and the liberalization and facilitation of trade and investment, striving to work together with different partners for making the cake of cooperation bigger and achieve mutually beneficial, win-win results, he said.

"We put forward the Belt and Road Initiative to facilitate international development and cooperation by achieving shared growth through discussion and collaboration on the basis of international rules," said Xi, stressing that China is willing to further cooperate with the World Bank under the framework of Belt and Road.

Kim expressed gratitude to China for its long-term great support to the World Bank. Noting that all countries should avoid shutting themselves in, and abide by the rules in the era of globalization, Kim said the World Bank appreciated China's support for multilateralism and economic globalization, as well as for capital increase and shareholding reforms at World Bank.

"The Belt and Road Initiative proposed by President Xi reflects farsightedness and greatly contributes to international development and cooperation and cause of poverty reduction," Kim said. "The World Bank is willing to deepen cooperation under the initiative."