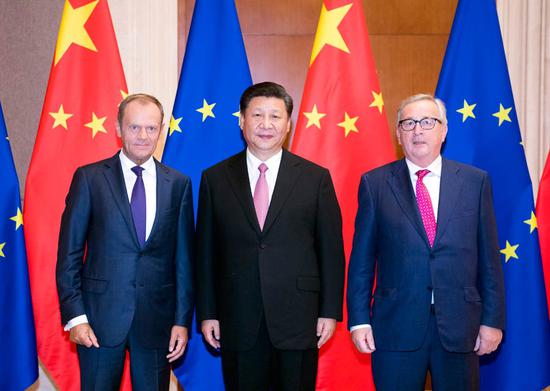 Being among the world's largest economies and trading entities, China and the European Union are also the beneficiaries and defenders of the multilateral trading system, he said.

The two sides should follow the trend of a multipolar world and the globalization of world economy, step up strategic dialogue and coordination, promote trade and investment liberalization and facilitation, refine global governance and move forward the cause of human peace and development, he said.

The country will deliver better performance in comprehensively deepening reform and expanding opening-up to the Chinese people as well as to the world in the future, he said.

Xi stressed that China has always seen the European Union as an important force that promotes stability and the development of international order.

Dialogue and cooperation between the two sides in various areas should be pushed forward proactively, and political dialogue should be reinforced, he said, adding that the political settlement of international and regional hot spot issues should be jointly carried forward.

The two sides should also tap into the potential of economic and trade cooperation, promote two-way investment and enhance cooperation in innovation. Cooperation under the Belt and Road framework should be enriched, and practicable cooperation involving third parties should be explored, Xi said.

New areas and models for the China-Europe Civilization Dialogue should be explored to expand exchanges and cooperation in cultural and people-to-people exchanges.

Mutual understanding and exchanges should be increased, and the two sides should respect the core interests and major concerns of each other to consolidate the foundation of mutual trust for the comprehensive strategic partnership, Xi said.

China and Europe should also firmly move forward the steady and long-term development of bilateral relations to inject more stability and positive energy into international society on the basis of equal treatment and win-win cooperation, he said.

China is ready to work with the European Union to further the bilateral comprehensive strategic partnership and promote the social and economic development and the public well-being of both sides.

Tusk and Juncker both expressed gratitude for China's support for the European integration process.

The European Union is willing to expand cooperation in various areas and enhance cooperation and communication in international affairs with China, they said, adding that the two sides should refine the multilateral trading system through multilateral consultation, according to an official release.

China and the EU agreed to make negotiation of a bilateral investment treaty the top priority and build an open, transparent, fair and predictable business environment for investors, according to a news release.

Witnessed by Li and the two EU leaders, six cooperative documents were signed in customs clearance, renewable economy and other fields.

Li said China will open its door even wider.

The EU should seize the opportunity to expand trade and investment with China and loosen restrictions on high-tech exports to the world's second-largest economy, Li said.