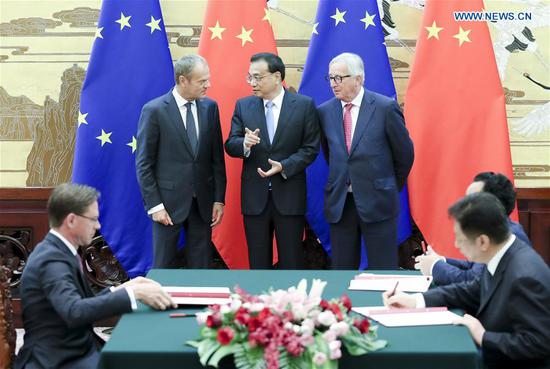 Chinese Premier Li Keqiang (C, back), European Council President Donald Tusk (L, back) and European Commission President Jean-Claude Juncker (R, back) witness the signing of a series of documents in the areas of investment, environment protection, circular economy, a blue partnership for the oceans and customs after the 20th China-EU leaders' meeting in Beijing, capital of China, July 16, 2018. (Xinhua/Ding Haitao)

Both sides agreed that faced with the current complicated international situation, especially the rise of unilateralism and protectionism, China and the EU, as two major forces and economies of the world, have the joint responsibility to safeguard the rules-based international order, advocate multilateralism, and support free trade so as to promote world peace, stability and development.

Both sides also agreed to jointly safeguard the UN charter and international law, and enhance dialogues on diplomacy and security policy to address common challenges.

The two sides are firmly committed to fostering an open world economy, promoting trade and investment liberalization and facilitation, and resisting protectionism and unilateralism.

Both sides strongly support the rule-based multilateral trading system with the World Trade Organization (WTO) as its core and were committed to complying with existing WTO rules.

The two sides agreed to set up a joint working group to discuss the WTO reform.

China and the EU exchanged market access offers of the ongoing investment agreement negotiations during the leaders' meeting and agreed to make the negotiations a top priority and strive to build an open, transparent, fair and predictable business environment for investors.

Both sides agreed to set up dialogues on drugs and humanitarian assistance and launch a joint feasibility study on deepening cooperation in the wines and spirits sector.

Both sides pledged to deepen China-EU Dialogue on IPR and strengthen their collaboration in IPR protection.

The two sides stressed their commitment to expanding two-way opening up and improving market access and investment environment, promoting synergies between China's Belt and Road Initiative and EU's initiatives, and accelerating the negotiations of the agreement on the cooperation and protection of geographical indications.

Both sides agreed to further advance the activities within the framework of the 2018 China-EU Tourism Year and facilitate tourism cooperation and people-to-people exchanges.

The two sides committed to supporting the G20, as the premier forum of international economic cooperation, continuing to play its active role in global economic and financial governance.

Both sides agreed the common interests between China and the EU are far more than the differences, and they will continue to adequately solve the differences in the spirit of mutual respect, equality and mutual benefit.

Noting China-EU ties are at a crucial period, Li said that China firmly supports the European integration and hopes to see the EU maintain unity, stability and development.

China is willing to enhance strategic communication and pragmatic cooperation with the EU to forge ahead the China-EU comprehensive strategic partnership, Li said.

Stressing that China's door will only open wider to the world, Li said the Chinese government issued a negative list for foreign investment not long ago and will further ease market access.

He encouraged the EU to grasp the opportunity to expand investment in and trade with China, ease the limitations on high-tech exports to China and create a fair and transparent environment for Chinese investment in Europe.

The China-CEEC leaders' meeting agreed to set up a 16+1 Global Partnership Center of CEEC and China in Sofia, Bulgaria to help enterprises from 17 countries better understand EU laws and regulations, he said.

Li welcomed European countries and EU institutions to conduct third-party cooperation with China in the CEEC to reach a win-win situation.

This year marks the 15th anniversary of forging a comprehensive strategic partnership between China and the EU.

Both Tusk and Juncker said the two sides had scored achievements in areas of trade, investment, diplomacy, connectivity and climate change in the past 15 years.

The current international structure is undergoing major changes which will affect world peace and development, they said.

They called on both sides to shoulder common responsibilities and resist protectionism and unilateralism, respect world-acknowledged international rules, draw lessons from history and avoid conflicts and upheavals.

They agreed that the 16+1 cooperation is conducive and the EU is glad to see China and the CEEC have face-to-face communication and cooperate with respect to the EU and within its functions and powers.

The two sides also had an in-depth exchange of views on regional and international issues of common concerns.

After the meeting, Li, Tusk, and Juncker witnessed the signing of a series of documents in the areas of investment, environment protection, circular economy, a blue partnership for the oceans and customs.

Both sides agreed to issue a joint statement of the 20th China-EU summit and China-EU leaders' statement on climate change and clean energy.

Also on Monday, Li and Juncker attended the opening ceremony of the China-EU entrepreneurs' roundtable.

Both Li and Juncker believed that China and the EU enjoy broad prospects of economic, trade and investment cooperation, calling on both sides to expand two-way opening up, ease market access, and improve the business environment to better realize win-win cooperation.

They also met the press on Monday morning.

Li said both sides exchanged market access offers, which would bring the investment agreement negotiations to a new stage, stressing it accords with the common interests of China and EU to reach the agreement as soon as possible.

"At present, the progress of the negotiations shows that China and EU are committed to promoting liberalization and facilitation in trade and investment, opposing protectionism and unilateralism, and supporting the rule-based multilateral trade system, Li said.

Li expressed his hope that both sides would have a positive and flexible attitude to achieve further progress in the negotiations, and put FTA issues on the agenda.