Trump, Putin content with summit despite lack of concrete results 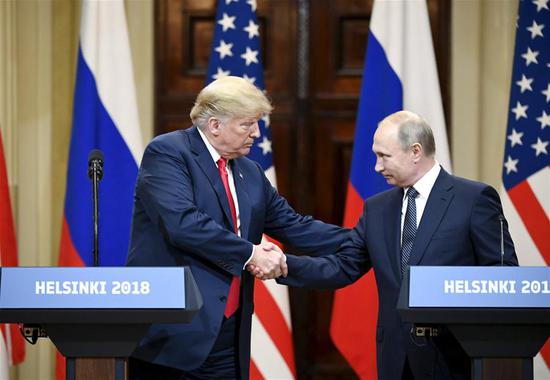 U.S. President Donald Trump and his Russian counterpart Vladimir Putin on Monday voiced their satisfaction with their first one-on-one meeting in Helsinki, though acknowledged problems remain.

Although the summit was described by Trump as "a very constructive day" and by Putin as "first important step", questions from reporters about the alleged meddling with U.S. elections by Russia still highlighted the post-summit press conference.

Trump told reporters he "spent a great deal of time" talking about the allegation with Putin, while Putin categorically denied any interference in the U.S. internal affairs.

"Could you name a single fact that would definitively prove the collusion? This is nonsense." Putin said, adding "There's no evidence when it comes to the actual facts, we have to be guided by facts not by rumors."

Putin also denied the accusation that Trump colluded with Russia in the presidential campaign of 2016.

The Russian president said his country has never interfered and is not going to interfere in American internal affairs.

In this case, Trump sided with his Russian counterpart by openly questioning his own intelligence agencies' findings that Moscow was behind the 2016 U.S. elections.

"President Putin says it's not Russia. I don't see any reason why it would be," said the U.S. president.

However, other than the so-called meddling, the leaders of the two world powers were not so in step.

On Syria crisis, they agreed that the two countries should cooperate, but failed to reach any concrete details.

"As we have discussed, the crisis in Syria is a complex one. But our cooperation between the two countries has the potential to save hundreds of thousands of lives," said Trump.

Putin called on the United States to work together to resolve the Syrian conflict, saying "Russia and the U.S. can take the lead on this issue in this country and work together to overcome the humanitarian crisis."

Putin said both countries considered it "necessary" to further work together on many issues, including extension of the Strategic Arms Reduction Treaty, the dangerous situation surrounding the development of elements of the global system of American missile defense, and the implementation of the Treaty on the Elimination of Intermediate-Range and Shorter-Range Missiles as well as avoiding weapons being placed in space.

No progress was made towards a joint stance on Crimea. Putin said the U.S. leader's stance on Crimea was "well-known" and said Trump "continues to maintain that it was illegal to annex it."

"Our viewpoint is different," Putin concluded.

"Today's meeting is only the beginning of a longer process, but we have taken the first steps towards a brighter future," Trump said.

"Of course, numerous problems remain, and we could not clear all the debris," said Putin.