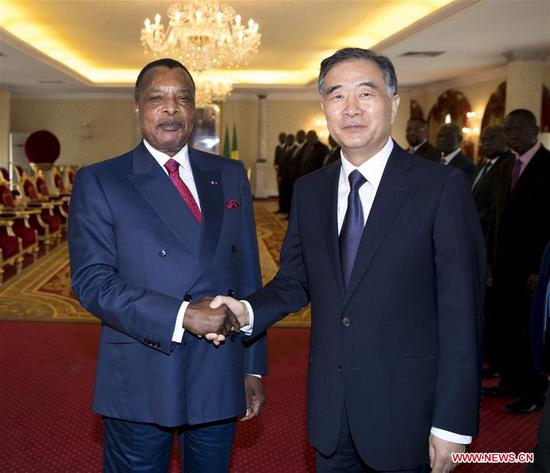 Wang Yang (R), chairman of the National Committee of the Chinese People's Political Consultative Conference, meets with Congolese President Denis Sassou Nguesso in Brazzaville, the Republic of Congo, June 13, 2018. At the invitation of Pierre Ngolo, president of the Senate of the Republic of Congo, Wang paid an official friendly visit to the African country from June 11 to 13. (Xinhua/Ding Haitao)

China's top political advisor Wang Yang paid an official visit to the Republic of Congo from Monday to Wednesday to further advance bilateral ties between the two countries.

Wang said Xi looks forward to having an in-depth exchange of views on the further development of bilateral ties and China-Africa ties with Sassou Nguesso during the upcoming Beijing Summit of the Forum on China-Africa Cooperation (FOCAC) to be held in September.

Xi visited the Republic of Congo in March 2013 during his first African visit since he took office in 2013. During Sassou Nguesso's state visit to China in 2016, the two countries lifted bilateral ties to the comprehensive strategic partnership of cooperation, opening a new chapter of bilateral ties.

China and the Republic of Congo have always provided mutual support on each other's core interests and issues of major concerns and closely coordinated on international and regional issues so as to safeguard common interests, said Wang.

China is willing to further enhance high-level exchange of visits, boost political mutual trust and focus on cooperation of the Belt and Road Initiative with the Republic of Congo in the hope of jointly building a China-Africa community with a shared future, said Wang.

Calling the Republic of Congo "a firm friend of China," Sassou Nguesso said his country spoke highly of the Belt and Road Initiative and the concept of building a community with a shared future for humanity, which were both proposed by Xi.

He said he expected to exchange views with Xi on state governance during the FOCAC Beijing Summit to further elevate bilateral ties and China-Africa ties to a new level.

Wang said his visit aimed to implement the consensus reached by the two heads of state and deepen traditional friendship between the two countries.

Wang said the 19th National Congress of the Communist Party of China (CPC) held last October established Xi Jinping Thought on Socialism with Chinese Characteristics for a New Era as a long-term guiding principle for the CPC and the thought was added into the CPC Constitution as well as the Constitution of the country.

The CPC stands ready to share its experience on party-building and governance with the Congolese Party of Labor so as to make the party-to-party cooperation forge a solid foundation for the comprehensive strategic partnership of cooperation between the two countries, said Wang.

He said that the CPPCC is willing to enhance exchanges with the Senate of the Republic of Congo to promote the synergy of both countries' development strategies so as to benefit both peoples.

Calling China a valuable friend of the Republic of Congo, Ngolo said recent years have witnessed great changes in his country and huge improvement of people's livelihood thanks to the country's robust cooperation with China.

The Republic of Congo is glad to see the achievements China has scored under the leadership of President Xi, he said.

The CPC has shouldered its historical responsibility by raising the concept of building a community with a shared future for humanity, Ngolo said.

The Congolese Party of Labor is willing to enhance exchanges on development concepts with the CPC, while the Senate stands ready to be a "propeller" of ties between China and the Republic of Congo so as to make new contribution to bilateral ties, he said.

During his respective meetings with Isidore Mvouba, speaker of the National Assembly and Clement Mouamba, prime minister, Wang said both countries have made fruitful cooperation in the areas of infrastructural construction, energy and resources development, air transport and finance.

China will continue to plan and implement the major projects between the two countries, create a sound environment for bilateral cooperation, promote cooperation in areas important to people's livelihood and share experience on poverty-eradication, Wang said.

Mvouba and Mouamba said the river of the friendship between China and the Republic of Congo, just like China's Yangtze River and the Congo River, runs a long course.

They expressed appreciation to China for the long-term and precious support during their country's liberation and peace building.

During his three-day visit in Brazzaville, capital of the Republic of Congo, Wang also visited joint cooperation projects including a demonstration village hosting the China-aided "Access to Satellite TV for 10,000 African Villages Project" at the village of Kintele, the Mpila Middle School and the Sino-Congolese Bank for Africa.

Wang arrived in Brazzaville on Monday evening, kicking off an official friendly visit to three African nations. The 10-day visit will also bring him to Uganda and Kenya.