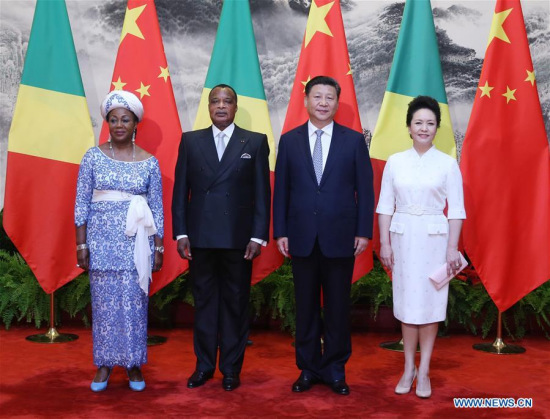 China on Tuesday offered to help the Republic of Congo in Central Africa to accelerate industrialization to diversify an economy heavily dependent on oil.

China is willing to expand partnership with the Republic of Congo in agriculture and aviation, Xi said, adding that exchanges in culture, education, youth, media and other areas are also welcome.

During the talks, the two countries upgraded their relations to a comprehensive strategic partnership. Xi stressed enhancing mutual trust through exchanges between governments, ruling parties, legislative bodies and local affairs.

China is ready to communicate and coordinate with the Republic of Congo on peace and security in Africa, climate change and other major international and regional affairs, Xi said.

Sassou Nguesso congratulated Xi on the 95th anniversary of the founding of the Communist Party of China and hailed the remarkable bilateral cooperation in infrastructure, hydropower and health.

Applauding China's positive role in Africa, Sassou Nguesso said the Republic of Congo is ready to take the upgrading of bilateral relationship as an opportunity to promote bilateral cooperation as well as China-Africa cooperation.

Sassou Nguesso said the Republic of Congo backs China's stance on the South China Sea and will work closely with China in international affairs.