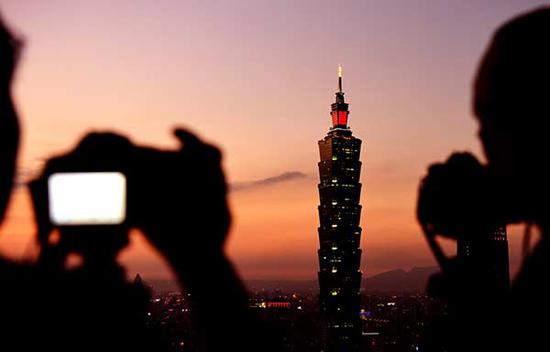 People take photos of the landmark Taipei 101 building in Taiwan in January 2017. (Photo/Xinhua)

Beijing expressed "grave concerns" over Washington sending officials to the opening ceremony of a new office of the American Institute in Taiwan on Tuesday, and urged Washington to keep its promises over the Taiwan question.

Foreign Ministry spokesman Geng Shuang made the remark after Marie Royce, U.S. assistant secretary of state for educational and cultural affairs, and other officials attended the ceremony.

"It's a grave violation of the one-China principle and stipulations in the three joint communiques between China and the United States if the U.S. sends officials to Taiwan under any excuse," he said.

"We urge the U.S. to keep the promises it made over the Taiwan question, correct what it has done wrong, thus to avoid damaging China-U.S. ties and peace and stability across the Taiwan Straits," Geng said.

The move by the U.S. came about three months after it signed the Taiwan Travel Act, which encourages "visits between officials from the United States and Taiwan at all levels", legislation that has drawn strong opposition from China.

The Chinese government has repeatedly expressed its firm opposition to countries that have diplomatic relations with or engage in any official or military interaction with Taiwan.

Jia Xiudong, a research fellow at the China Institute of International Studies, said such moves show that the U.S. is hoping to "contain" China by playing up the Taiwan question and that it has "two-faced" policy toward China.

While maintaining relations with China, the U.S. challenges its core interests such as those involving the Taiwan question, Jia said.

If such behavior is not stopped, he added, it will eventually damage China-U.S. ties and peace across the Taiwan Straits.

But this behavior will not change the trend of more countries coming to acknowledge the one-China policy, which is upheld by the international community, Jia said.