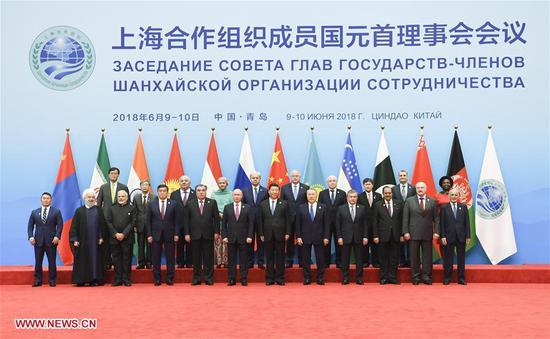 Chinese President Xi Jinping (6th R, front) poses for a group photo with other leaders and guests ahead of the 18th Meeting of the Council of Heads of Member States of the Shanghai Cooperation Organization (SCO) in Qingdao, east China's Shandong Province, June 10, 2018. Xi chaired the meeting and delivered a speech. (Xinhua/Gao Jie)

Observers from around the world have been paying close attention to the keynote speech delivered by Chinese President Xi Jinping at the just-concluded Shanghai Cooperation Organization (SCO) summit, expecting a bright future for the bloc.

The summit, held on June 9-10 in Qingdao, a coastal city in east China's Shandong Province, marked the first gathering of leaders of its eight member states since India and Pakistan became full members last year at the Astana summit in Kazakhstan.

Sultan Mehmood Hali, head of Pakistan-China Media Forum and a senior defense and political analyst, echoed Xi's remarks, saying that the Shanghai Spirit is the "driving force" and "guiding force" for the 17-year-old organization.

"It has gelled the first six countries and now eight countries together to have a common destiny and transcend the differences with each other and develop into a system of cooperation which requires mutual trust, mutual respect and shared values," Hali said.

At a roundtable meeting, Xi praised the SCO as "a new model for regional cooperation," which was well received by experts.

"Within the framework of the SCO, multiple regional problems can be solved, such as security and strategic stability, as well as economic integration," said Boris Volkhonsky, head of the Asia and Pacific Rim Center of the Russian Institute for Strategic Studies.

"Today, with the participation of the leading economies of Eurasia, the SCO has become an integral core," said Volkhonsky.

The SCO was established in 2001 by China, Kazakhstan, Kyrgyzstan, Russia, Tajikistan and Uzbekistan. With two new members, it now accounts for nearly half of the world's population and over 20 percent of the global economy.

At the summit, Xi urged related parties to "work closely to build an SCO community with a shared future" and "move toward a new type of international relations."

"We should reject self-centered, short-sighted and closed-door policies," Xi said. "Equality, mutual learning, dialogue and inclusiveness between cultures should be championed."

Konstantin Garibov, analyst for Russia's Sputnik News Agency, said Xi's speech showed that China is willing to "help ensure that the Eurasian space becomes a model of a new type of international relations based on a stable world, universal security, common prosperity, openness and inclusiveness."

Experts also highlighted Xi's emphasis on people-to-people exchanges, saying that it will lead to a win-win situation.

MD Nalapat, director of the Department of Geopolitics at Manipal University in India, said China has demonstrated through the SCO that there is a better solution than a military one.

"A better solution is to have a calm solution involving people-to-people contact, involving soft power and involving conciliation," he said. "I think frankly that is the Chinese way, the 'win-win' situation."

Hali, the Pakistani analyst, believes the Belt and Road Initiative proposed by China can promote such exchanges. It's a platform in which "you reach out to everyone, you share each other's progress and you benefit from each other," he said.