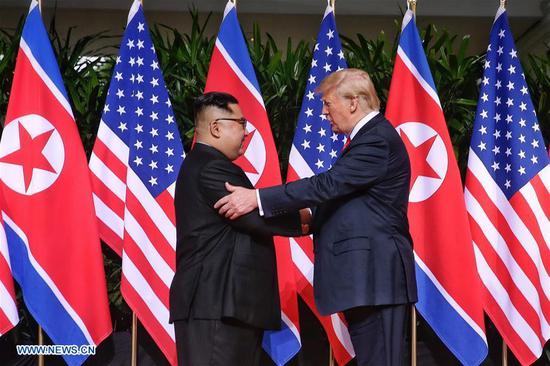 They shook hands and held a 40-minute one-on-one meeting at the Capella Hotel on Singapore's resort island of Sentosa, before proceeding to an expanded meeting and a working lunch with their aides.

The larger meeting was attended by three major security and diplomatic aides to Kim and Trump, respectively.

The expanded meeting came after the one-on-one session between Kim and Trump, which the U.S. leader described as "very, very good." During the face-to-face talks, Trump said he had an "excellent relationship" with Kim.

Kim and Trump started their first summit with a historic handshake that lasted for a few seconds before a row of national flags of the two countries.

"This is just a new beginning," said Trump while shaking hands with Kim.

Kim, dressed in a dark suit, and Trump, sporting a red tie, talked at a corner in the hotel corridor for a few minutes, before they walked along the passage into the meeting room and sat down in front of journalists.

"The way coming here was not easy," said Kim.

The DPRK leader said he and Trump came here after overcoming "all the obstacles" such as old prejudice and practices that had stood in their way forward.

After shaking hands again with Kim in front of cameras, Trump gave a thumbs-up before starting the first meeting between an incumbent U.S. president and a DPRK leader.

Since taking over his country's leadership in late 2011, Kim had made only three known trips to foreign countries before the Singapore visit. He traveled to China twice and to the South Korean side of the truce village of Panmunjom.