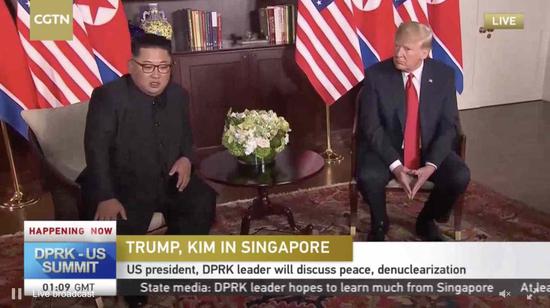 It is the first-ever meeting between a DPRK leader and a sitting U.S. president.

"It was not easy to get here," Kim told reporters as he sat alongside Trump. "The old prejudices and practices worked as obstacles on our way forward, but we overcame all of them and we are here today."

Trump voiced optimism as he sat next to the DPRK leader. "I feel really great. We are going to have a great discussion, and I think tremendous success. It will be tremendously successful and it's my honor, and we will have a terrific relationship."

The U.S. president had said earlier that he would size up the DPRK leader "within the first minute" of Singapore summit.

The two leaders then took part in a short one-on-one meeting, with just two translators alongside.

The leaders are expected to discuss denuclearization and establishing peace on the Korean Peninsula.

The two sides seemed optimistic about the meeting, as the world waits with bated breath for the outcome of the high-stakes summit.