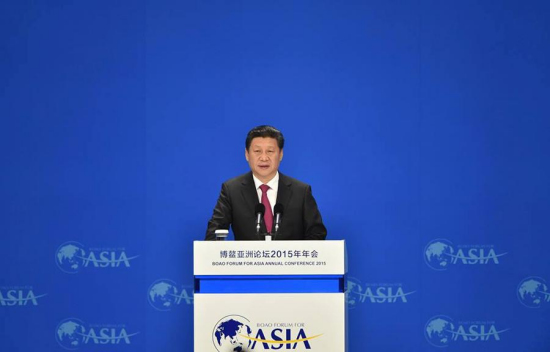 Xi has attended the forum three times ? in 2010 (as vice president), 2013 and 2015 ? sharing his insights and visions on regional and world issues with government and business leaders from other countries.

In 2010, Xi gave a speech titled “Work Together for Asia’s Green and Sustainable Development”, calling on Asian countries to transform their growth patterns to actively respond to climate change and achieve green development and sustainable growth. He also appealed to Asian nations to further open their markets and firmly oppose protectionism.

During his 2013 speech, “Working Together Toward a Better Future for Asia and the World”, Xi said China continues to commit to reform and opening up, and called for regional cooperation to enhance common development.

Xi also mentioned “a sense of community of common destiny” in this speech, echoing the concept of “a community of shared future” he proposed in Moscow on March 23 the same year.

In 2015, during his speech titled “Towards a Community of Common Destiny and A New Future for Asia”, Xi further elaborated on the concept of “a community of common destiny”, asking the world to abandon its “zero-sum game” to achieve win-win cooperation.

Xi also elaborated on China's Belt and Road Initiative and the Asian Infrastructure Investment Bank (AIIB), saying the initiatives will be carried out following principles of wide consultation, joint contribution and shared benefit, and welcomed countries around the world to actively participate.

In this year's speech, Xi is expected to expound on China's achievements and experience, while announcing new measures in reform and opening up, as this year marks the 40th anniversary of the policy, according to Chinese State Councilor and Foreign Minister Wang Yi when briefing media about the forum.

President Xi will also explain China's stance on further promoting building a community with a shared future for Asia and humanity, Wang said.

Here are some highlights from Xi’s previous speeches.

On green and sustainable development

"To maintain the sound momentum of economic development in the region and boost world economic growth, we must further improve the development model, and seek a path of green and sustainable development that is with Asian characteristics and is consistent with the trend of our times."

“In such an open world as ours, development of Asian countries and development of the world are simply inseparable. It is important that we open our markets even wider, firmly oppose and resist protectionism in all forms and uphold a fair, free and open global trade and investment system. At the same time, we should give full play to the role of regional and sub-regional dialogue and cooperation mechanisms in Asia to promote harmonious and sustainable development of Asia and the world.”

On regional cooperation and common development

“Mankind has only one earth, and it is home to all countries. Common development, which is the very foundation of sustainable development, serves the long-term and fundamental interests of all the people in the world. As members of the same global village, we should foster a sense of community of common destiny, follow the trend of the times, keep to the right direction, stick together in time of difficulty and ensure that development in Asia and the rest of the world reaches new highs.”

On ‘a community of common destiny’

"Over the past 70 years, Asian countries have gradually transcended their differences in ideology and social system. No longer cut off from each other, they are now open and inclusive, with suspicion and estrangement giving way to growing trust and appreciation. The interests of Asian countries have become intertwined, and a community of common destiny has increasingly taken shape."

“The old mindset of zero-sum game should give way to a new approach of win-win and all-win cooperation. The interests of others must be accommodated while pursuing one's own interests, and common development must be promoted while seeking one's own development.”

On the 'Belt and Road Initiative'

"In promoting this initiative, China will follow the principle of wide consultation, joint contribution and shared benefits. The programs of development will be open and inclusive, not exclusive. They will be a real chorus comprising all countries along the routes, not a solo for China itself. To develop the Belt and Road is not to replace existing mechanisms or initiatives for regional cooperation. Much to the contrary, we will build on the existing basis to help countries align their development strategies and form complementarity."