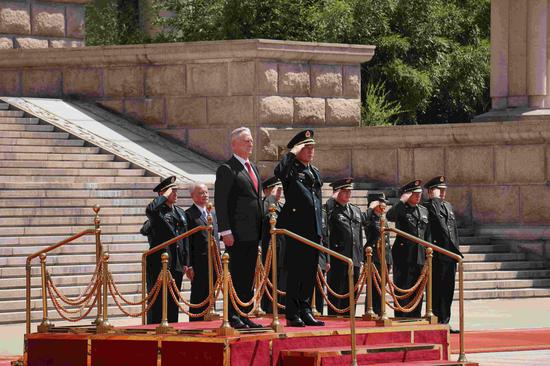 The U.S. Secretary of Defense James Mattis has just received a welcome ceremony. Wei and Mattis, after inspecting the guard of honor of the Chinese People's Liberation Army, held talks and exchanged views on issues of common concern.

During the talks, Wei said that Mattis' visit will help facilitate healthy interactions and relations between the two militaries.

Mattis invited Wei Fenghe to visit the U.S. at an appropriate time.

Ahead of the visit, Mattis said he was ready for a "conversation" with China, and indicated an open mind. "I want to go in and do a lot of listening."

"China attaches great importance to developing military relations with the U.S. and hopes that the U.S. and China can meet each other halfway and work together to make the bilateral military relations an important stabilizing factor for relations between the two countries," Senior Colonel Ren Guoqiang, spokesman for China's Ministry of National Defense, said on Monday.

China wants to develop a healthy and stable mil-to-mil relationship with the U.S. in accordance with the common interests of both sides. And the relationship is a universal expectation of the international community.

Later in the day, the defense secretary will meet President Xi Jinping and other senior Chinese officials.