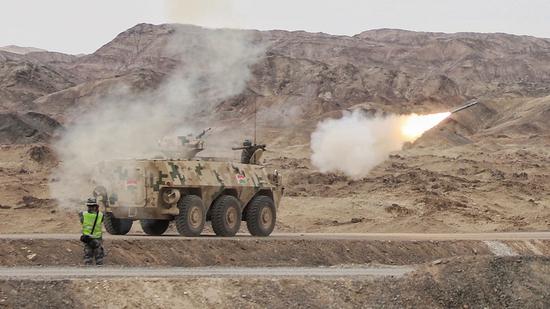 The goal is to challenge the 385 participants through rugged terraces and strict rules, testing their abilities and conducting military exchanges in hope to develop a friendship bond between the 17 teams from ten countries including China, Russia and Pakistan.

In the end, they all have but one final goal – to win. The atmosphere is tense.

Xu Youze, the chief judge for "Suvorov Attack," said that all teams pay close attention to the daily scores. They request statistics and take them back and analyze every detail for the next contests.

This was followed on Tuesday by "Clear Sky," in which air defense units fire at aerial targets, both while halted and in motion.

Chinese teams took an initial lead, but the outcome is still uncertain as the games will last until August 11th.

The third contest "Safety Route" begins on Thursday. It will test engineering units trying to cross a minefield.

But the results of the games are not the only achievements.

Zhou Zhigang, coach of China's "Suvorov attack" team, said that through training and competing with foreign armies, they have broadened their horizons by comparing techniques, and this experience keeps improving their training methods.