Memorable moments in the history of PLA(1/21) 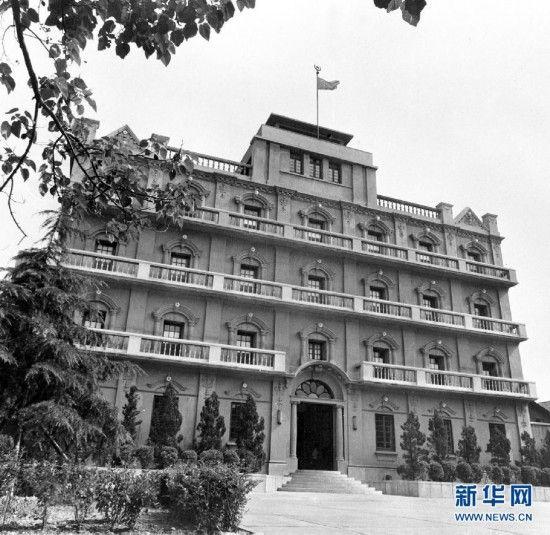 A file photo shows the former site of the August 1 Nanchang Uprising in Nanchang, capital city of Jiangxi Province. (Photo/Xinhua)

Since the predecessor of the People's Liberation Army was founded 91 years ago, the army has evolved from a "millet plus rifles" single-service force into a modern one armed with sophisticated equipment and information technologies. Here are some photos that capture the hardship and bloody fight the troops endured during the wartime and the army's growth as a formidable modern force.

On August 1, 1927, the Communist Party of China (CPC) initiated the Nanchang Uprising to counter the anti-communist purges by the Kuomintang. The Nanchang Uprising was seen as CPC's initial bid to establish the people's army. August 1 has been used as the major symbol of the PLA flag and army emblem since 1949. The date is also celebrated as China's Army Day.

Originally called the "Chinese Workers' and Peasants' Red Army", the Chinese military has played a key role in determining the course of the country. 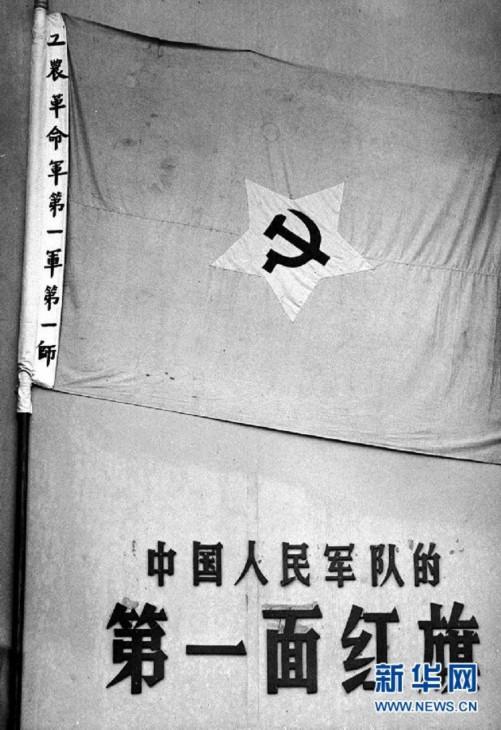 The flag of the Chinese Workers' and Peasants' Red Army in 1927. (File photo/Xinhua)

On September 9, 1927, Mao Zedong led the Autumn Harvest Uprising in Central China's Hunan province. In October, the troops arrived at Jinggang Mountain where Mao decided to name them the Workers' and Peasants' Red Army - the military arm of the CPC. 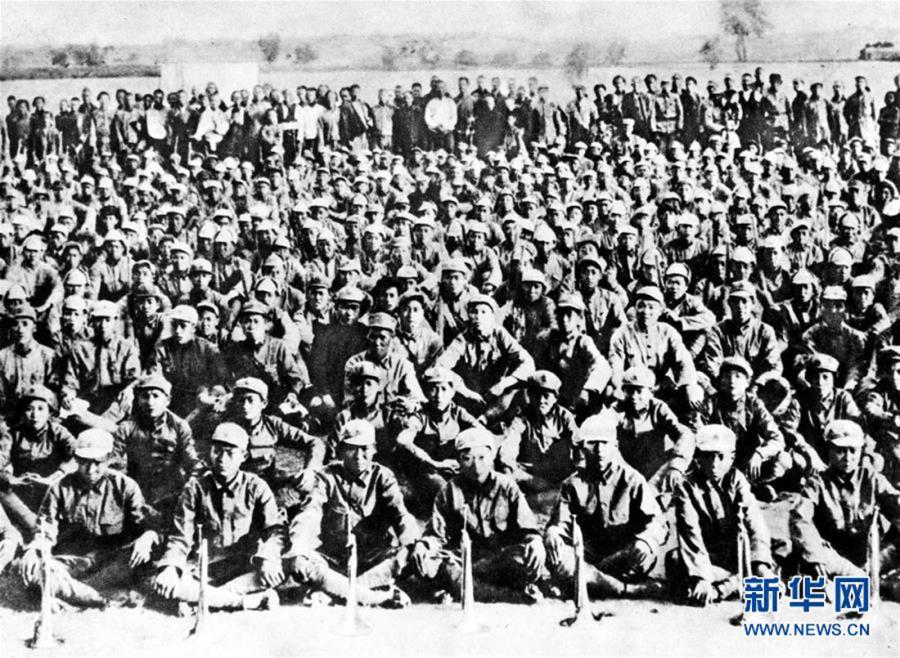 The Long March, which lasted from October 1934 to October 1936, was a military maneuver by the Red Army, the forerunner of the People's Liberation Army. The route features raging rivers, snow-covered mountains and arid grasslands.

The three major forces of Red Army, the First, Second and Fourth Front Armies joined together in Northwest China's Gansu province, on October 1936. 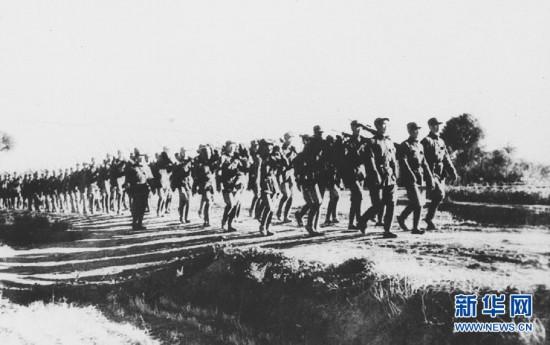 A file photo shows the Eighth Route Army led by CPC marching to the front in northern China on September 1937, during the War of Resistance Against Japanese Aggressions (1931 - 1945). (Photo/Xinhua)

Japan invaded northeastern China in September 1931 and launched a full-scale invasion on July 7, 1937. The Battle of Pingxingguan took place in North China's Shanxi province in September 1937. The 115th Division of the Eighth Route Army, who were familiar with the mountainous area, cut off the enemy's logistics line and killed more than 1,000 Japanese troops in an ambush. It was the first victory and one of the key victories against Japanese aggressors.

From August 20 to December 15, 1940, the Eighth Route Army and the Japanese troops fought in the largest and longest battle in North China known as the Hundred Regiments Offensive. 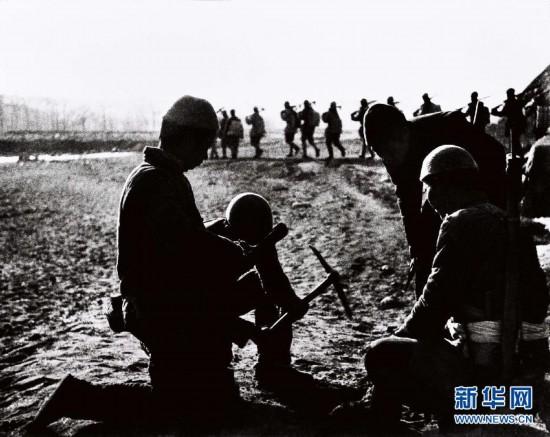 During the anti-Japanese war, under the leadership of the Party, the Eighth Route Army, the New Fourth Army and other anti-Japanese armed forces of the people penetrated deep behind enemy lines to mobilize the masses, peasants in particular, to launch guerrilla warfare.

Land mine warfare was widely used and played a key role in blocking the Japanese troops. In May 1943, over 15,000 militiamen were engaged to counter Japanese "mopping-up" operations in the Taihang area, taking part in more than 2,000 engagements. In the heartland of the Taihang Mountains, it was said that the "sound of gun?re permeated the air" as Japanese soldiers were under attack in almost every village. 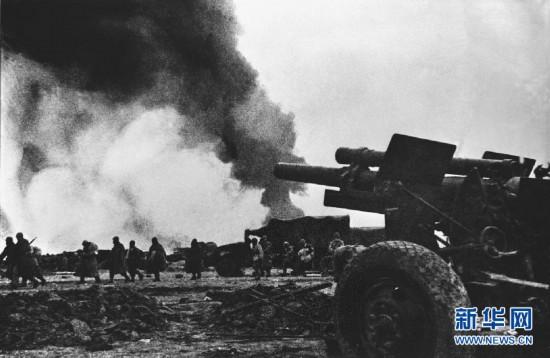 File photo shows the battlefield of Huaihai campaign during the War of Liberation (1946-49).(Photo/Xinhua)

From June 1946, the Kuomintang armies launched a concerted attack on the Liberated Areas led by the CPC, and a large-scale civil war started. On November 6, 1948, the East China Field Army and the Central Plain Field Army jointly launched the Huaihai Campaign against Kuomintang troops, which ended on January 10, 1949, with the total victory of the PLA.

With the victories of two other major campaigns Liaoshen Campaign and Pingjin Campaign, which were launched during the War of Liberation, the CPC overthrew the Kuomintang and won a great victory in 1949.

The Pingjin Campaign was a decisive campaign fought between November 29, 1948, and January 31, 1949, by the PLA Northeast Field Army, two armies of the North China Field Army and part of local armed forces against Kuomintang troops over an area extending from Zhangjiakou in the west to Tanggu and Tangshan in the East, including Beiping and Tianjin. The PLA wiped out the defending Kuomintang forces in Xinbao'an, Zhangjiakou and Tianjin. 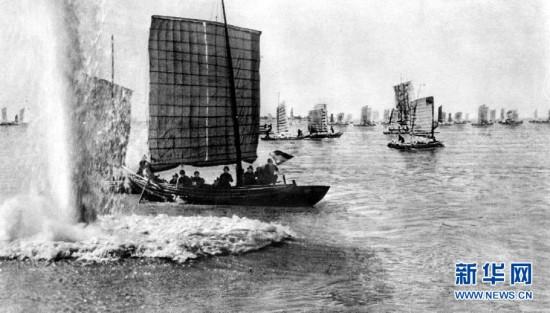 PLA soldiers crossing the Yangtze River under a hail of bullets during the War of Liberation (1946-1949). (Photo/Xinhua)

On May 27, 1949, the Third Field Army liberated Shanghai. The troops slept on the streets as they did not want to inconvenience the residents of the city. (File photo/Xinhua) 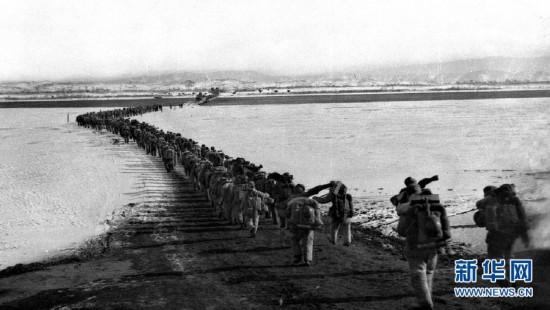 On the evening of October 19, 1950, the Chinese People's Volunteer Army valiantly crosses the Yalu River, marching toward the Korean battlefield. (File photo/Xinhua)

The Korean War began on June 25, 1950, and the Chinese People's Volunteer Army crossed the Yalu River on October 19, 1950, marking the beginning of the War to Resist U.S. Aggression and Aid Korea. In the following month, the PLA Northeast Frontier Force's four corps moved to the Yalu River's banks.

After entering the Democratic People's Republic of Korea, the Chinese People's Volunteer Army launched attacks and quickly drove the U.S.-led troops from the Chinese border back to the south of the 38th Parallel. The volunteer army then successfully stood their ground along the 38th Parallel and forced the US to propose ceasefire talks.

The PLA Hong Kong Garrison was formally stationed in Hong Kong and assumed defense duties on July 1, 1997, when Hong Kong returned to China.

During the past 21 years, the garrison has undergone extensive training in Hong Kong, playing a positive role in safeguarding the city's stability. The garrison has also won Hong Kong people's hearts and minds with its low-profile presence, growing openness and continuous care and respect for the local community. 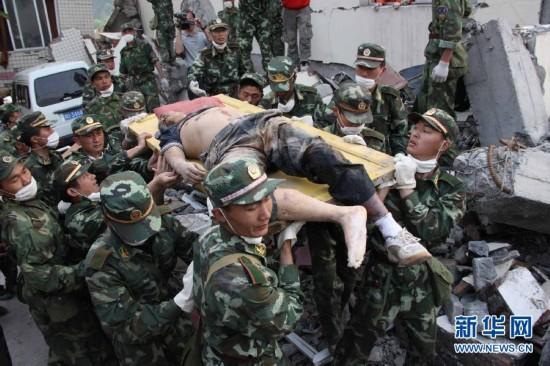 PLA soldiers carry a wounded man after an earthquake in Wenchuan county, Sichuan Province, May 15, 2008. (Photo/Xinhua)

A warship sets off from Sanya, Hainan province, for an escort mission in Gulf of Aden, Dec. 26, 2008. (Photo/Xinhua) 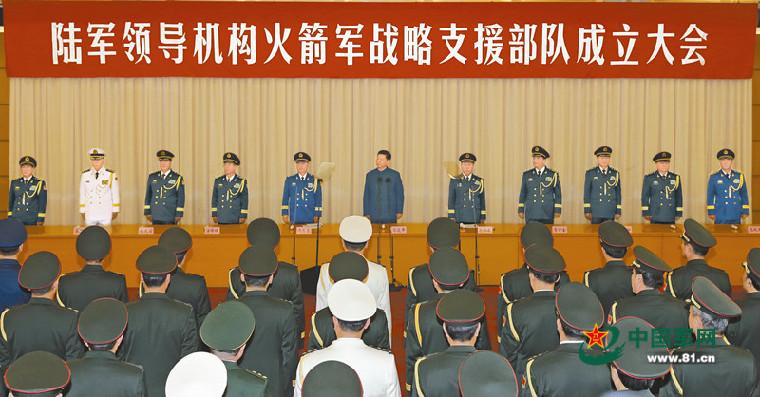 The PLA Rocket Force was established in December 2015 to replace the former PLA Second Artillery Corps, which had managed the country's ballistic missiles since the 1960s. (Photo/81.cn) 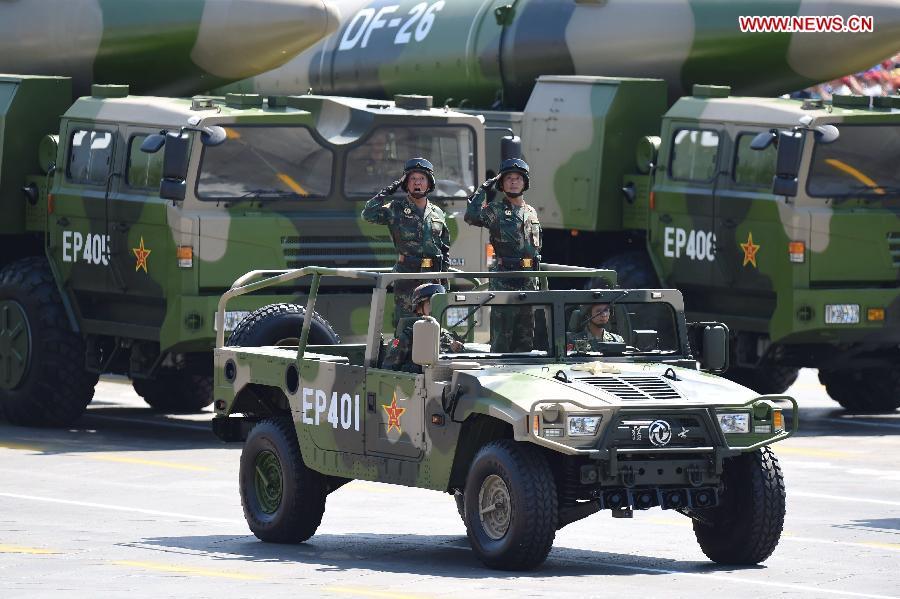 DF-26 missiles are displayed during the military parade to mark the 70th anniversary of the end of World War II, in Beijing, Sept. 3, 2015. (Photo/Xinhua) 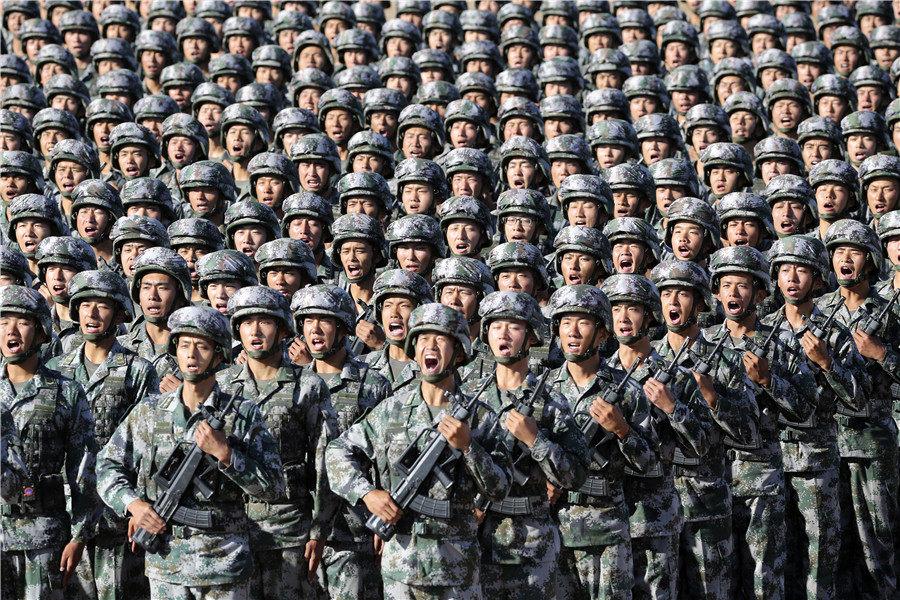 Troops train for a military parade at Zhurihe training base in North China's Inner Mongolia autonomous region, July 30, 2017. The parade was held to celebrate the 90th anniversary of the founding of the Chinese People's Liberation Army. (Photo by Feng Yongbin/China Daily) 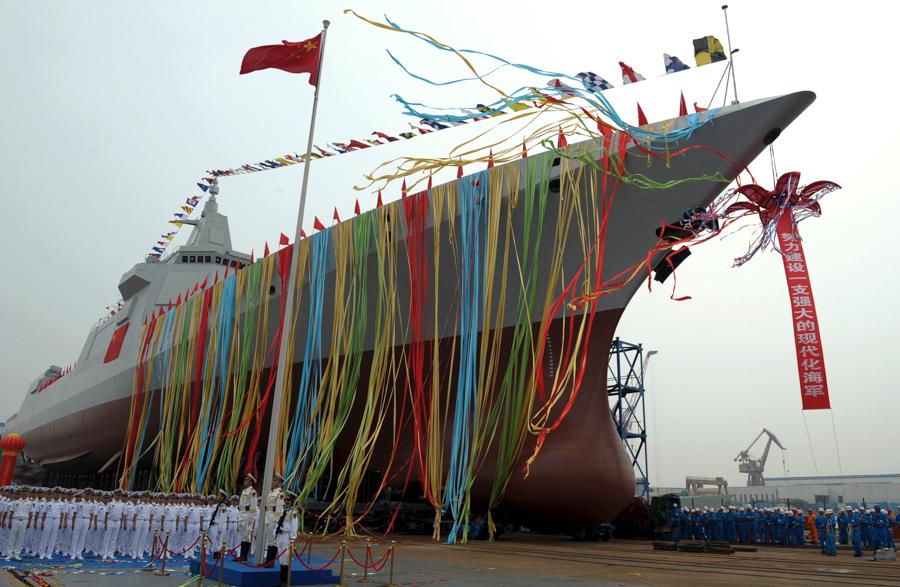 A launch ceremony for China's new-generation guided-missile destroyer is held in Shanghai on June 28, 2017. (Photo by Pu Haiyang/For China Daily)

China launched a new domestically developed destroyer in Shanghai on June 28, 2017, marking a milestone in building a strong and modern naval force.

The ship is the first of the country's new-generation guided-missile destroyer class, with a full displacement of around 10,000 metric tons.

It is called one of the largest and mightiest of its kind in the world. 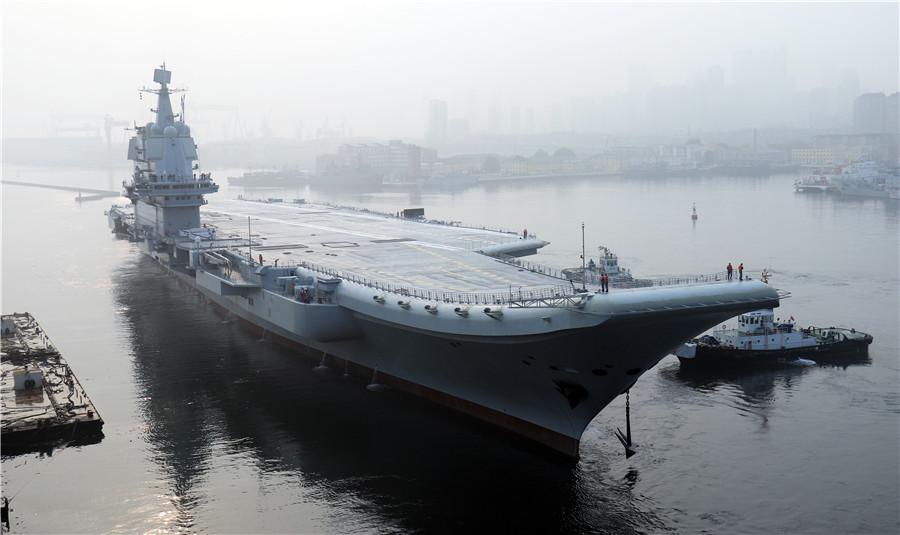 The ship, the largest and most sophisticated naval vessel in China, was designed and built by the nation on its own. Currently, the Navy operates a sole aircraft carrier, CNS Liaoning, which was originally a Soviet-era vessel that was extensively refitted at the Dalian shipbuilder. 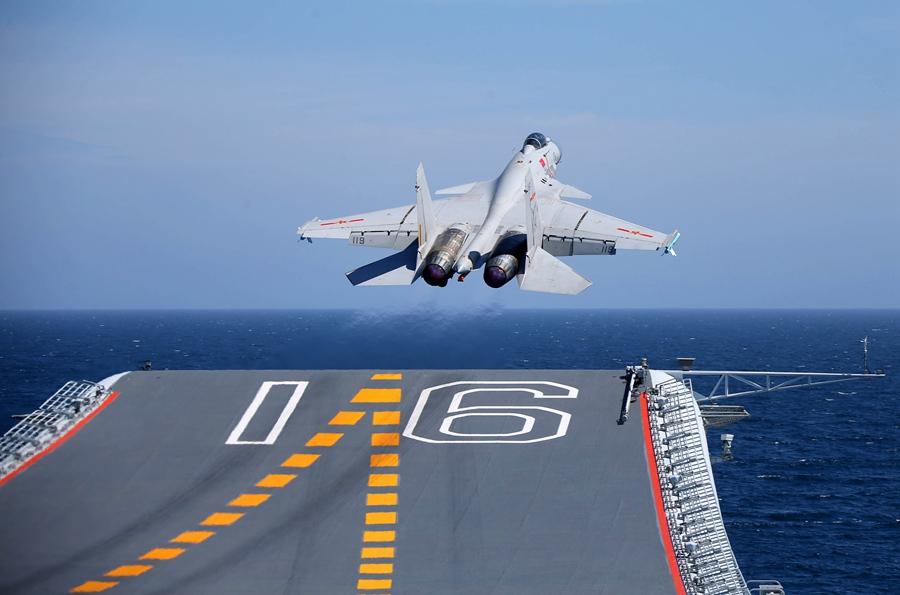 A J-15 fighter jet undertakes training aboard aircraft carrier Liaoning during a drill on April 20, 2018. (Photo by Li Tang/Provided to chinadaily.com.cn)

During the past decades, the PLA has spared no effort to modernize and strengthen its capabilities as a fighting force. It gradually developed its own tanks, aircraft and ships to replace weapons bought from other countries.

On August 1, 1927, the Communist Party of China (CPC) initiated the Nanchang Uprising to counter the anti-communist purges by the Kuomintang. The Nanchang Uprising was seen as CPC's initial bid to establish the people's army. August 1 has been used as the major symbol of the PLA flag and army emblem since 1949. The date is also celebrated as China's Army Day.

Originally called the "Chinese Workers' and Peasants' Red Army", the Chinese military has played a key role in determining the course of the country.)) ?>"/>