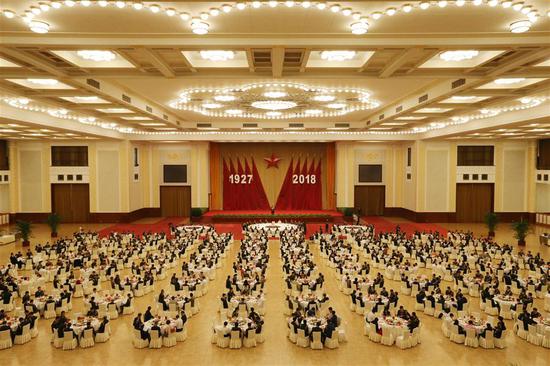 A reception is held by Chinese Ministry of National Defense to celebrate the 91st anniversary of the founding of the Chinese People's Liberation Army (PLA) in Beijing, capital of China, July 31, 2018. (Xinhua/Li Yiye)

A reception was held by the Ministry of National Defense on Tuesday to celebrate the 91st anniversary of the founding of the People's Liberation Army (PLA), which falls on Aug. 1.

On behalf of the Communist Party of China Central Committee, the State Council, and the Central Military Commission, State Councilor and Minister of National Defense Wei Fenghe extended Army Day greetings to the personnel of the PLA, the Armed Police Force, the reserve force, the militia, veterans, army heroes and role models, among others.

China will firmly stay on the path of peaceful development, pursue a national defense policy that is in nature defensive, and work with other countries to promote the Belt and Road Initiative, Wei said at the reception.

China will promote the building of a new type of international relations, build a community with a shared future for humanity, and continue its efforts to safeguard world peace, contribute to global development, and uphold international order, he noted.

There is only one China, and Taiwan is an inalienable part of Chinese territory, said the defense minister, pledging that the PLA has the resolve, the confidence, and the ability to defeat separatist attempts for "Taiwan independence" in any form and any external interference.

The army will stay true to its founding mission and work hard to build the people's forces into world-class forces, Wei said.