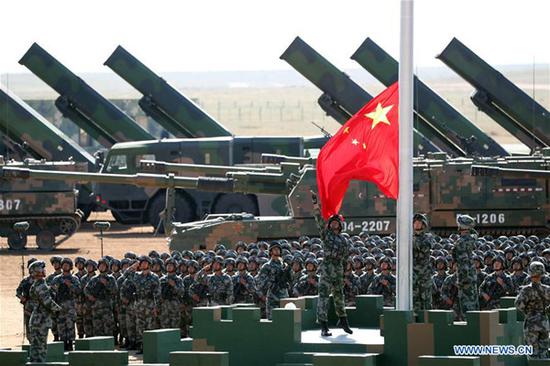 President Xi Jinping has called for greater resolve and synergy in efforts to put an end to commercial activities of the military across the board.

Xi, also chairman of the Central Military Commission and general secretary of the Communist Party of China Central Committee, made the remark at a collective study session of the CPC Central Committee's Political Bureau on Tuesday, one day ahead of Army Day.

Xi said that innovation and breakthroughs should be made in a manner that is both proactive and secure, and commercial activities of the military must be halted without any compromise.

The military is expected to stop all its commercial activities by the end of the year, and related work is being conducted with good momentum, he said.

Over the past two years, the military has seen major progress in halting its commercial activities thanks to efforts to implement the decision by the CPC Central Committee and the Central Military Commission and focus on tackling difficulties, he said.

The target of separating the military from commercial operations has been basically reached, which helped promote stricter governance of the Party and the military and helped the military to focus on its main mission of battle readiness, he said.

However, the tasks at hand are still arduous and heavy, and it is important to continue the momentum, face difficulties head-on and ensure the targets already set can be fully reached, he said.

They should also face contradictions and problems head-on and work unswervingly toward solving problems.

Xi stressed that it is important to free the mind, step up exploration in practices and enhance innovation in mechanisms and systems.

More work will also be done to push forward the optimized combination of resources for military and local governments to enable better utilization, he said.

Xi noted that there are many complicated factors that are related to work in halting the commercial activities of the military.

It is important to ensure the stability of both the military and society, he said.

Related policies and regulations should be further refined, and legal awareness should be further strengthened to better use legal tools so that there are rules to follow and the legitimate interests of the military and the people can be protected, he said.

He also stressed that the work must be comprehensive and has no forbidden areas and zero tolerance for wrongdoing.

Clues to solving problems must be followed thoroughly, and individuals and cases of legal or disciplinary violations must be dealt with stringently, he said.