By the mid-21st century, China's army will be "fully transformed into a world-class force," General Secretary of the Communist Party of China (CPC) Central Committee Xi Jinping pledged at the 19th CPC National Congress in October.

The PLA is not only retaining its dedication to traditional requirements, but also building an elite combat force aided by advanced military technology.

Xi, also Chinese president, reaffirmed the CPC's absolute leadership over the army, adding that "there shall be no wavering, no hesitation, and no ambiguity."

"Always listen to and follow the party's orders, and march to wherever the party points," Xi said on July 30 last year.

Dressed in camouflage military fatigues, Xi, also the chairman of the Central Military Commission, inspected a parade on July 30, 2017 celebrating the 90th anniversary of the founding of the PLA. It was the very first time China has celebrated its Army Day – which officially falls on August 1 – with a military parade since the founding of the People's Republic of China. It was also the first time Xi reviewed troops in the field, according to Xinhua News Agency.

During the inspection session, Xi repeatedly shouted, "Hello comrades!" and "Comrades, you are working hard!", while the troops bellowed back with "Serve the people!", "Follow the Party!", "Fight to win!" and “Forge exemplary conduct!"

The Central Military Commission (CMC) issued a guideline on November 5, 2017 affirming the absolute leadership of the Party.

Stand with the people

The head of the CMC also urged the armed forces to bear in mind the sacred duty of fighting for the people, as the country has set military-civilian integration as one of its key national strategies since March 2015.

Calling on all PLA members to be "unswervingly committed to the fundamental principle of serving the people wholeheartedly," Xi said the PLA needs to "always stand side by side with the people."

Xi made the remarks during the parade last year.

During a plenary meeting of the delegation of PLA and armed police at the 13th National People's Congress (NPC) in March 2018, the president, once again, called for practical efforts to further deepen military-civilian integration.

"Implementing the strategy of military-civilian integration is a prerequisite for building integrated national strategies and strategic capabilities and for realizing the Party's goal of building a strong military in the new era," Xi said.

Built to fight, fight to win 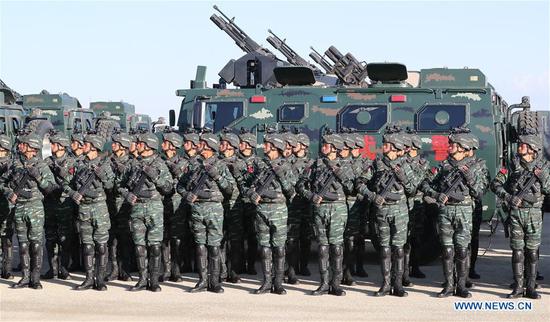 An elite and powerful force needs to be forged, and "ready for fight, capable of combat and sure to win," said Xi.

"A military is built to fight," Xi stressed at the CPC National Congress. "Our military must regard combat capability as the criterion to meet in all its work and focus on how to win when it is called on."

The Chinese president reiterated the importance for PLA to improve their combat capability and readiness for war during an inspection tour to the CMC joint battle command center on November 3, 2017.

Efforts in joint operation command systems and training conducted under combat conditions are also expected to help the armed forces.

On July 25, 2017 at a Political Bureau of the CPC Central Committee group study, Xi called for deepening military reform so as to build armed forces smaller in size but stronger in structure – stressing quality over quantity.

"Quantity should be reduced and quality improved to build capable and efficient military forces, which should be science and technology-oriented rather than relying on labor intensity," the Chinese president stated.

China's military reform accelerated when Xi put forward "the dream of a strong army" in late 2012.

On September 3, 2015, Xi announced China would cut the number of troops by 300,000 in a speech at a gathering to commemorate the 70th anniversary of the victory of Chinese people's resistance against Japanese aggression and the World Anti-Fascist War.

In the fourth reduction of troops since China’s reform and opening-up in the 1980s, the number of Chinese troops had been reduced from 2.3 million to two million.

Underscoring the importance of innovation and reform, Xi called for enhancing science and technology integration into the military. He demanded efforts to create an information system and data on battles.

"High attention should be paid to digitization so as to foster more high-quality military talent," he said, during an inspection of a division of the PLA ground force in the Central Theater Command on January 3.

The Chinese President extended that same message to the PLA Navy, during an inspection of the navy on board the Changsha destroyer in the South China Sea in April this year.

He called on the navy to build a modern maritime combat system in an effort to enhance the ability to conduct diversified military missions.