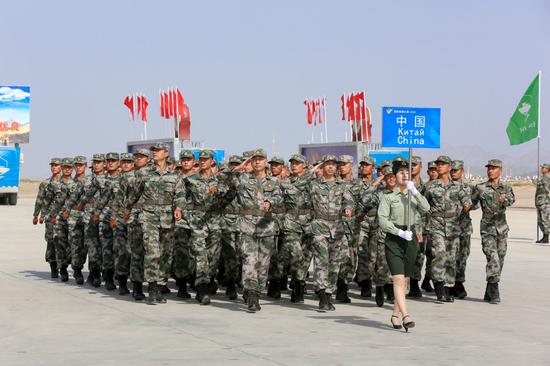 The International Army Games 2018 will offer a good platform for global military exchanges and a bridge for friendship and cooperation, a senior official said ahead of the games' start on Monday in Korla, Xinjiang Uygur autonomous region.

Military units from 10 countries-including China, Russia, Iran and Pakistan-will compete in Korla in three contests: the Suvorov Attack race and shooting competition by infantry fighting vehicles, the Clear Sky test for air defense units, and Safe Route, a new contest held in China this year in which teams make their way through a minefield.

Another contest, Seaborne Assault, hosted by the Chinese Navy for the first time, will take place at Quanzhou, Fujian province.

"As host, we will uphold the spirit of fighting, honor and win-win cooperation, and will fulfill our commitment to professionalism, openness and sharing," Major General Ye Jianjun said at the games' opening ceremony on Sunday.

The games, begun by the Russian Ministry of Defense, were approved by President Xi Jinping who is also the chairman of the Central Military Commission, with the aim of promoting military theory innovation and improving training and war readiness.

Xi and Russian President Vladimir Putin both sent their congratulations in 2017 when the PLA hosted the games for the first time in Korla, and they shared an understanding and strategic thinking about the games, according to Ye.

China is one of the seven countries that host this year's games. The contests in Russia started on Saturday at the Alabino training ground near Moscow.

Altogether 28 contests will be held in this year's games in seven countries: China, Russia, Kazakhstan, Belarus, Armenia, Azerbaijan and Iran. The games end on Aug 11.

Senior Colonel Liao Yanling, spokesmen for the PLA, said on Friday that unlike in the 2017 games, this year's focus more on realistic battles with the fields of competition and game procedures more adjusted to realistic combat standards.

"I am confident that with the joint efforts of all parties, IAG 2018 will present a new look and be a first-class event," said Liao.

At the contests in Korla, all participants except the Russian "Suvorov Attack" team will use Chinese equipment and weapons, and the Chinese army have dispatched experienced instructors to offer intensive adaptive training for foreign contestants.

Pakistani Lieutenant Colonel Kamran Zaheer said that it is the Pakistani team's first time coming to China, and he looked forward to the competition very much.

"I have felt a warm welcome," Zaheer said, "China and Pakistan have a strong friendship, and I will pass that on to the Pakistani military."

Iran's Brigadier General Khosro Koohmarei said he was impressed with the PLA, calling it "strong, disciplined and well-trained" and that he found China had made outstanding achievements in weapons and equipment manufacturing when he participated in the 2017 games.

"We hope to enhance our friendship with all participating countries through the games," he said.

Russia's General Aleksandr Lentsov said organizing the event requires cooperation from all participating countries. Russia will continue to broaden the influence of the games and invite more countries to join and expand the competition categories.

Ye said China will have several discussions with Russia before any specific contests are decided upon for next year's games.

"It will certainly contribute to the development of international military technical cooperation and the promotion of military service," Putin said in a welcoming letter to the games' opening ceremony.