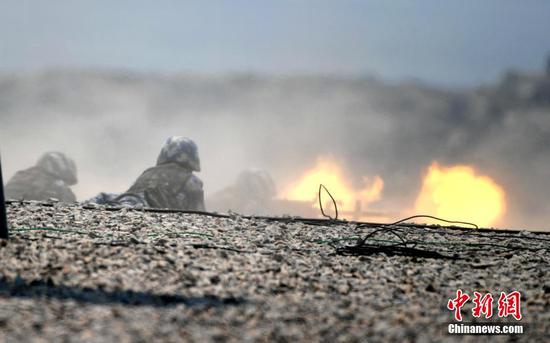 A total of 17 teams with 358 soldiers from 11 countries, including China, Belarus, Egypt, Kazakhstan, Russia, Venezuela and Zimbabwe, are participating in the contests that will conclude on Aug. 11.

Some other countries including Armenia and India have sent observers to the events.

It is the first time for the People's Liberation Army (PLA) ground force to host the "Safe Route" contest, which contains several stages such as traversing minefields and assembling mechanized bridges and involves forces from China, Pakistan, Russia and Uzbekistan.

"Seaborne Assault" contest is hosted by the PLA Navy for the first time. Contestants from Iran, Russia, Sudan, Venezuela and China will compete in this event that consists of obstacle course, survival trail and relay race in Quanzhou, Fujian.

Since 2014, International Army Games have been successfully held for 4 times. Currently, the games cover over 20 professional areas of the army, navy and air force. With the participation of about 30 countries, the international influence of the games has become greater each year.

Many countries, armed forces and military personnel long for presenting strength of their military forces through this platform, said Kong Jun, head of the "Seaborne Assault" organization committee and commander of the PLA Navy Marine Corps.

"We hope that through this event, we can further improve our mutual understanding and trust, deepen our military cooperation and exchanges, consolidate our friendship, and make even greater contributions to world and regional peace and stability," said Ding Yi, deputy commander of the PLA Navy.

"It is a precious opportunity to take part in this event to compete with my foreign counterparts," said Xu Xiaofei from the PLA Navy Marine Corps. "I very much look forward to stepping onto the competition arena and having exchanges with them. "

The International Army Games, initiated by the Russian Ministry of Defense, is co-organized by China, Russia, Belarus, Azerbaijan, Kazakhstan, Armenia and Iran this year.

China has taken part in the games for five years, and started to host some of contests last year.