Chinese State Councilor and Foreign Minister Wang Yi on Monday met with his British counterpart Jeremy Hunt in Beijing on Monday. Both sides have reaffirmed their keen willingness to strengthen the two countries' "golden era" of relations at the 9th China-UK Strategic Dialogue.

The two held an in-depth exchange of ideas on deepening cooperation on free trade, multilateralism and global governance.

Given the rising trend of anti-globalization, the two leaders agreed that it is of vital importance for both China and the UK to make joint efforts in upholding rules-based international order, as well as solving regional issues.

This is Hunt's first major overseas trip since he replaced Boris Johnson as the foreign secretary earlier this month.

During British Prime Minister Theresa May’s visit to China in January, both sides agreed to advance their relations to a higher level, described as the “Golden Era.”

May also invited Premier Li Keqiang to visit her country early next year. Meanwhile, the UK plans to send a high-level delegation to China’s first International Import Expo in Shanghai this fall. 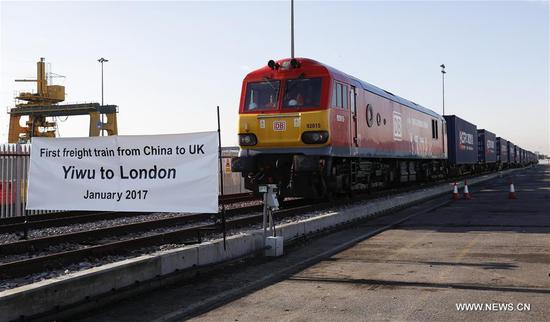 According to statistics from HM Revenue & Customs of the UK, the country's total exports to China reached 5.7 billion U.S. dollars in the first quarter of 2018. That's an 8.1 percent increase year-on-year.

Meanwhile, the UK imported 13 billion U.S. dollars worth of goods from China during the same period, seeing a 10.7 percent growth year-on-year. In 2017, total cargo trade between China and the UK amounted to 79 billion US dollars, an increase of 6.2 percent over the previous year.