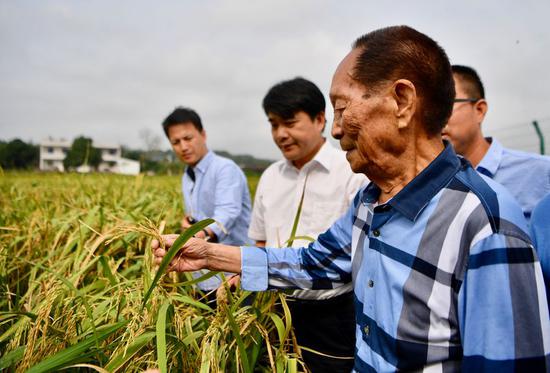 Yuan, born in September 1930, has helped China work a great wonder -- feeding nearly one-fifth of the world's population with less than 9 percent of the world's total land.

Getting enough to eat, however, used to be a serious problem in China. "I saw heartbreaking scenes of people starving to death on the road before 1949," recalled Yuan.

It was that year when Yuan applied for Southwest Agricultural College and began his special connection with rice -- a staple food of the Chinese people that would become the focus of his lifelong research career.

A discovery of a peculiar wild rice species by Yuan in the southern island of Hainan in 1970 became the prelude of China's decades of hybrid rice research. Three years later, he cultivated the world's first high-yielding hybrid rice strain with three lines, namely, the male sterile, maintainer and restorer.

Hybrid rice has since been grown across the country and farmers reaped incredible output after switching to Yuan's hybrid varieties.

Hybrid rice recorded an annual yield about 20 percent higher than that of conventional rice strains-- meaning it could feed an extra 70 million people a year. Now its accumulated planting area in China has exceeded 16 million hectares, with the total grain output 658 billion kg in 2018, a nearly fivefold increase from that of 1949.

"China has a large population but little arable land, the only way for us to guarantee our national food security is to increase crop yield," he said.

In 1995, local farmers planted 20,000 hectares of two-line hybrid rice in 55 counties on a trial base. The per hectare output reached 8,250 kg, 1,125 kg more than that of the three-line strain. The success established China's leading position in the global field of hybrid rice research.

In 1996, the Ministry of Agriculture formally established a super rice breeding program. Four years later, the first phase of the 10.5 tonnes per hectare target was achieved. The record was shattered three more times with jumps to 12 tonnes in 2004, 13.5 tonnes in 2011 and 15 tonnes in 2014.

Now the target of 18 tonnes per hectare is about to be achieved, according to Yuan.