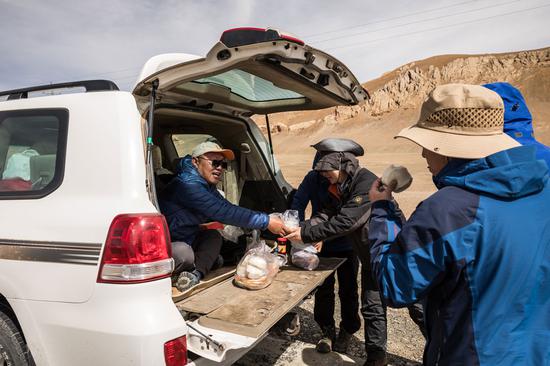 The expedition team often have meals in the field. One meal typically consists of buns and chili sauce. (CGTN Photo）

Dr. Yang Kun still keeps a shaky cellphone video he took six years ago. In the video, dense clouds scud down the mountainside like a tide of ink. The location is in Yadong County in China's Tibet Autonomous Region, on the border with India and Bhutan, hemmed in from the southwest side by the majestic Himalayas Mountain Range more than 7,000 meters in elevation. Dr. Yang didn't know clouds could climb that high, crossing the Himalayas to move from South Asia into China.

For someone who studies the climate system on the Tibet Plateau, this was a breakthrough. It would help Dr. Yang understand the correlation between atmospheric water exchange and precipitation. He's a professor at the Department of Earth System Science at Tsinghua University.

"The weather forecast of East Asia depends heavily on the Plateau," he said. "But the forecast is not very reliable. If we try, maybe we could improve the model," Dr. Yang recalls the words that his postdoctoral advisor told him two decades ago. "It's a lofty purpose," he laughs.

The Qinghai-Tibet Plateau lies at the heart of Asia – a vast area of land where the continent's weather is made, and where its great rivers flow from. So important that it's been given names such as "Asia's Water Tower," or the "Third Pole," with some of the Earth's most complex terrain and rich biodiversity.

"We try to monitor the climate pattern, build a model out of it to forecast a disaster," says Dr. Yang. His team has built several monitoring stations in Yadong to collect data on rain level, soil moisture and wind patterns. "The terrain is too complicated here. Disasters such as blizzards, landslides and mountain floods can be terrible. Our work might be helpful in mitigating the loss of property and lives." Their data will be used to perfect the current climate model and global water cycle observation satellites. 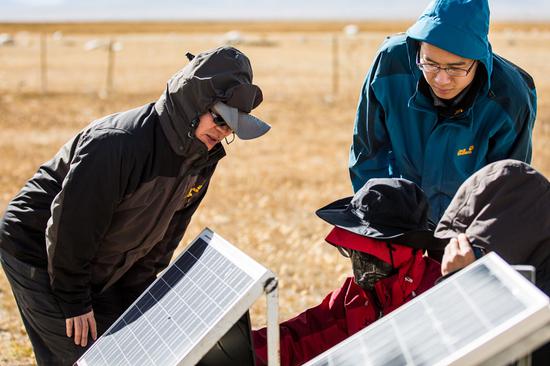 Dr. Yang Kun (left) and his team study the transfer of water and energy on China's Tibet Plateau. (Photo by Wang Tiezheng)

The work is as meaningful as it is dangerous. Some scientists have given their lives trying to understand the Tibetan Plateau. Its altitude, freezing temperature, harsh weather and geography can all be deadly. Dr. Yang Kun counts himself lucky.

"The glaciologists and limnologists' work is more dangerous," he said. "My team hasn't come across any accidents, but I worry every day," he said, on the verge of tears, standing up and waving his hands to discontinue the interview.

For once, the cool-headed scientist is dominated by his emotions.

Dr. Yang turns his back toward the camera to face the snow mountains, his head lifted, hands clasped in front of his chest as though to pray.

For him, and generations of scientists before him, a lifetime's research on the plateau may only be, at best, a small step toward solving nature's many unpredictable puzzles.

"It's tough work, but not miserable," he says as he finally he sits down again. "If one day, my work can help improve the current climate prediction model even just a little bit, that'd be my life-long dream, and I'm living the dream."