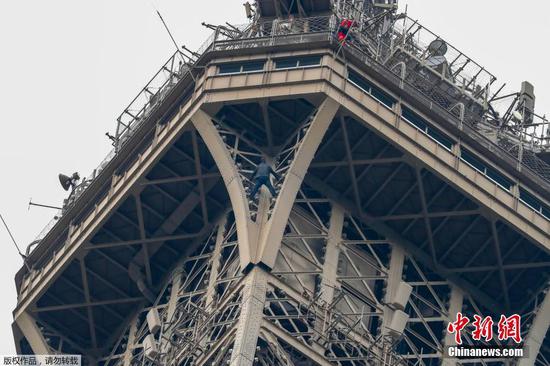 A man is found trying to climb one of the pillars of Eiffel Tower, May 20, 2019. (Photo/Agencies)

The Eiffel Tower was urgently evacuated on Monday after a man was found trying to climb one of the pillars of the monument, according to several French media.

The man was spotted early in the afternoon between the second and third floor. The Paris police headquarters requested emergency evacuation of the building for security concerns. The management company of the Eiffel Tower has advised visitors to postpone their visit "to avoid a long wait".

According to the TV channel LCI, the climber was still on the Eiffel Tower at around 4:00 p.m.local time and the firefighters have made contact with him.