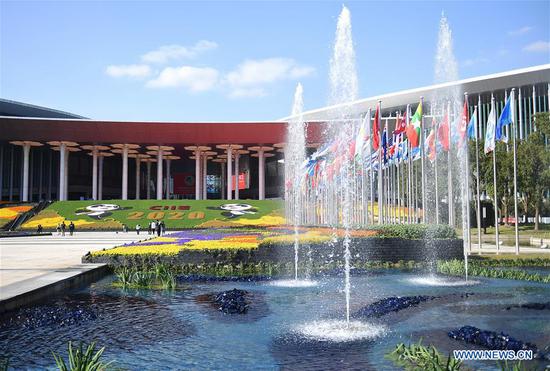 Photo taken on Nov. 4, 2020 shows an exterior view of the National Exhibition and Convention Center (Shanghai), the main venue for the third China International Import Expo (CIIE), in Shanghai. （Photo/Xinhua）

Senior corporate executives expressed confidence that the third China International Import Expo, which kicked off in Shanghai with its opening ceremony on Wednesday, is a major step by China to further open its market and bolster people's confidence amid the COVID-19 pandemic.

Kamran Vossoughi, president and CEO of Michelin in China, said at the end of January, when the outbreak was severe, the tire major had decided to participate in the CIIE without any hesitation.

"The pandemic has a big impact on the economy of China and the world. A platform like the CIIE is important in helping the economic recovery and in restoring people's confidence," Vossoughi said.

According to him, Michelin will demonstrate its rich offerings beyond tires at the CIIE and will scout for new business opportunities and potential partners.

Similar sentiments were expressed by executives of Otis, a US manufacturer of elevators and escalators, which is participating in the CIIE for the first time this year.

Perry Zheng, president of Otis China, said after the epidemic was brought under better control in the nation, China is moving at full speed to build new digital infrastructure such as 5G and internet of things. Otis is actively engaged in supporting this sustained effort and the company will showcase its IoT technologies at the event.

According to the senior executives, this year's CIIE is particularly significant on the back of the pandemic.

Teh-han Chow, CEO of the China branch of Fonterra, the New Zealand-based multinational dairy cooperative, said, "When you look at China, compared to the rest of the world, it is probably the only market that is going to grow this year.

"We see that Chinese consumers have increased their spending capabilities and their power…(we hope) that the need for new products, innovation, and hopefully that need to spend money can be satisfied through events such as the CIIE," Chow said.

Werner Eichhorn, president of Audi China, said the company is glad to see that China is able to host large events such as the CIIE against the backdrop of COVID-19. "This is really a confidence-booster for companies operating in China."

Jochen Goller, president and CEO of BMW China, said the expo presents a great opportunity for BMW, which has joined the CIIE for the third consecutive year. "We see the CIIE as a symbol of China's continuous opening-up, that has brought sustainable success for the country over the past four decades."