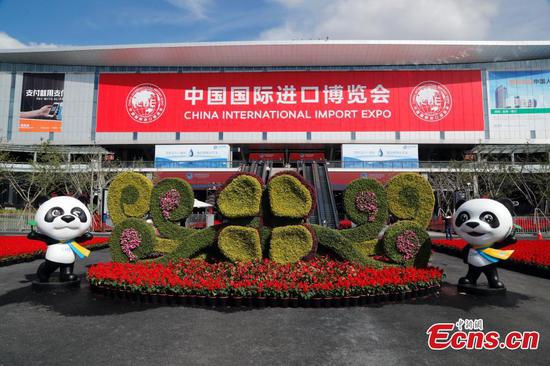 The photo taken on October 31, 2018 shows an entrance of the National Exhibition and Convention Center (Shanghai), the main venue to hold the upcoming first China International Import Expo (CIIE), scheduled to be held from Nov. 5 to 10, in Shanghai, east China.(Photo: China News Service/Tang Yanjun)

During the expo taking place from Nov. 5 to 10, consumers can enjoy a 30-percent discount on these foreign products from their import value-added tax and consumption tax, the Ministry of Finance said in a statement on its website.

The ministry posted a list on its website, specifying foreign exhibitors and their respective sales that will be subject to the favorable tax policies.

Companies that are not on the list will also be eligible for favorable policies, but their sales that surpass 20,000 U.S. dollars will not enjoy the tax reference.

Prohibited imports, endangered animals, plants and their byproducts, as well as autos and 20 other named products will not be able to take advantage of the favorable tax policies, the ministry said.

The CIIE is scheduled to kick off in Shanghai on Monday. More than 3,000 companies from over 130 countries and regions have so far confirmed their participation in the event.