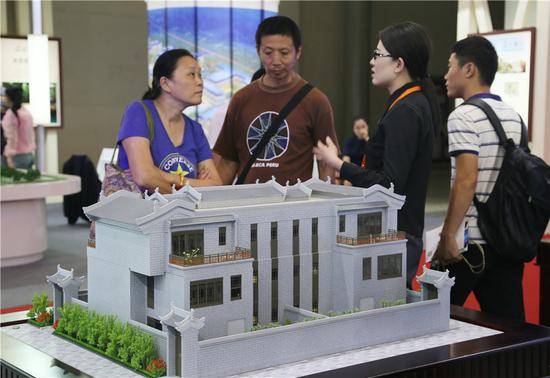 A saleswoman introduces a housing project at a property fair in Beijing on Sept .13.( WU CHANGQING/FOR CHINA DAILY)

The continuous effort to restrict speculative property purchases and curb house prices has paid off in a number of cities as the market in early October displayed signs of cooling down, according to industry experts.

China's real estate sector usually regards September and October as golden months, with sales normally peaking during this period. However, the market in the first week of this October has remained stable.

According to China Index Academy, a Chinese property market databank, only 7,000 square meters of property were sold in Beijing from Oct 1 to 6, a 19 percent drop year-on-year, while Shenzhen, the nation's rising technology hub, witnessed a 49 percent decline in transaction volume year-on-year.

Average transaction volume in the four first-tier cities of Beijing, Shanghai, Guangzhou and Shenzhen increased by 39.5 percent, mainly boosted by Shanghai and Guangzhou, where 60,400 and 59,600 square meters of houses were sold respectively, up 271 percent and 40 percent compared to the same period last year. The sales performance in third-tier cities showed a dramatic decline of 51.5 percent year-on-year.

"The low transaction volume in the Beijing property market doesn't mean insufficient demand," said Yan Yuejin, research director with the E-house China R&D Institute. "Rather, it shows that the policy to restrict purchases and mortgages has paid off and stabilized the market."

Zhang Dawei, chief analyst at Centaline Property Agency, said although the majority of cities are still experiencing rising property prices, signs of a price drop have started to emerge in cities such as Beijing, Shanghai, Shenzhen and Hangzhou.

He said some major cities will enter a phase in which supply exceeds demand.

Such a trend does not appear to be a good news for real estate developers, which held more frequent sales promotions in cities such as Shanghai.

During the holiday period, one of the most eye-catching headlines in social media was a real estate developer in Shanghai promised a free BMW car for house buyers－or a 200,000 yuan ($29,100) discount.

At a September meeting of Vanke, one of the leading real estate developers in China, Chairman Yu Liang said the company failed to hit half of its annual goal of 630 billion yuan by the end of September, according to a report by The Paper, a Chinese media outlet.

"If the sales performance stays low, the company will have 100-billion-yuan worth of property in stock by the end of year," he was reported as saying.

Zhang, from Centaline, said if the regulatory policy continues to tighten, developers will start to offer more discounts as they face growing financial pressure.