Funds to invest in unicorn CDRs 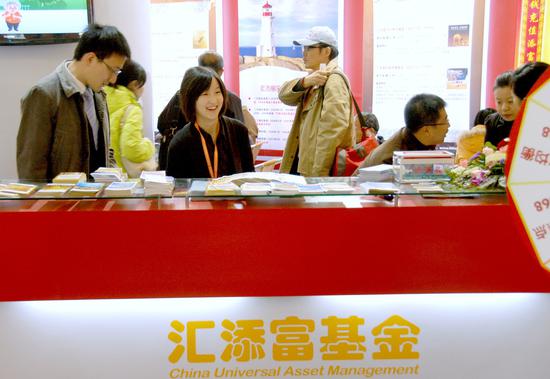 A fund manager from an asset management company oversees brochures about various financial products, to be given away to prospective individual investors, at the company's stall at the 7th Money Fair held in Shanghai earlier this year. （Photo provided to China Daily）

Within days of receiving regulatory approval, six Chinese asset managers have succeeded in raising an estimated around 300 billion yuan ($46.36 billion) this month for hybrid funds that will invest in certain securities of unicorns (or startups with a valuation in excess of $1 billion).

Each of the six asset managers launched a three-year hybrid fund, money for which has been raised from retail investors as well as institutional investors.

The pilot funds have an upper limit of 50 billion yuan each. A sales director at one of the six asset managers said the six hybrid funds are believed to have grossed less than the maximum permissible collective amount of 300 billion yuan.

The six hybrid funds will invest mainly in the Chinese Depository Receipts or CDRs of unicorns listed in overseas markets.

Market observers said the move to allow asset managers to invest in CDRs heralds acceleration of China's opening-up in the financial services industry. The move will also help stabilize the stock market, they said.

Individual investors were able to subscribe to the hybrid funds between June 11 and 15, while institutional investors finished their subscriptions on June 19.

Each individual investor was allowed to invest up to 500,000 yuan in each hybrid fund. Institutional investors had no upper limit.

Subscriptions were funneled through sales channels offered by banks and securities brokerages.

The lock-in period for each hybrid fund is three years. The funds would be eventually listed on stock exchanges as openended, which means investors can trade their shares.

"It's a key sign of China further opening up its financial services industry," said Tang Yao, an economics professor at the Guanghua School of Management at Peking University.

"The launch of the three-year hybrid funds could be a measure to boost liquidity in the A-share market and lend more stability to the capital market," said Tang.

Dong Dengxin, a finance professor at the Wuhan University of Science, said hybrid funds with lock-in periods are an innovation by Chinese asset managers.

The Chinese mainland has 78 unicorns listed on US and Hong Kong bourses. Another 120 unlisted unicorns are engaged in sectors like internet-based finance, automobile, hardware and entertainment, according to a report from GF Securities.

Chinese technology firm Xiaomi has been the first unicorn to apply for CDRs. But the Beijing-based smartphone and appliance maker has sought to postpone its CDR issue. Its application was originally scheduled to be reviewed by China's securities regulator on June 19.

Industry experts said escalating trade tensions between the United States and China, and China's deleveraging moves, have affected stock-market sentiment, so Xiaomi may be thinking the current period is not the best time to launch its CDRs.

China has been keen that overseas listed Chinese firms, especially tech majors such as Tencent Holdings Ltd, Alibaba Group Holding Ltd, Baidu Inc, JD and NetEase Inc, should not ignore the domestic A-share market. The introduction of CDRs was seen as a way to link such companies and local investors.

Zhang Dongke, deputy general manager of the Shanghai Stock Exchange, said earlier this month that the bourse has done the preparatory work needed for the CDR pilot program.