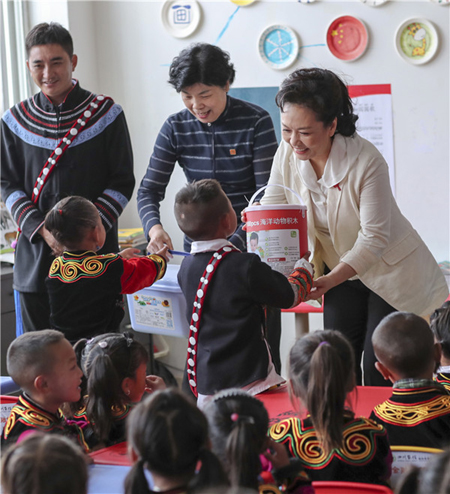 Peng Liyuan, the wife of President Xi Jinping, brings gifts to children from the Yi ethnic group in the Liangshan Yi autonomous prefecture, Sichuan province, on Thursday. She encouraged them to develop healthy habits in childhood to avoid illnesses and disease later. [Photo provided to China Daily]

Peng Liyuan, the wife of President Xi Jinping, attended various activities promoting the prevention and treatment of AIDS in the Liangshan Yi autonomous prefecture in Sichuan province on Thursday and Friday.

Peng, who is the World Health Organization's goodwill ambassador for combating tuberculosis and HIV/AIDS, learned about the distribution of free drugs and watched a tele-consultation at the local hospital's AIDS treatment center, according to the National Health Commission.

In a local primary boarding school, she learned about the study routine and life of students and encouraged them to continue studying hard.

Peng played with children of the Yi ethnic group at a village preschool education center and told them the importance of developing healthy habits in childhood to prevent illnesses or disease.