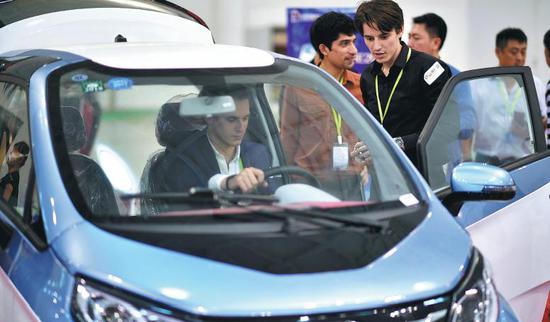 The industrial and telecommunications segment has maintained a momentum of steady and sound growth with innovative industries driving new growth engines.

Some promising signs can be found in the growth momentum of an array of emerging innovative sectors as data from the National Bureau of Statistics showed that sales of new energy vehicles, integrated circuits and industrial robots grew 56.7 percent, 17.2 percent and 35.1 percent year-on-year respectively in May.

According to the Ministry of Industry and Information Technology, the information and telecommunications sector has played an important role in driving the industrial economy.

In the first quarter of this year, information consumption witnessed stable growth, as epitomized by the increase of the nation's telecom revenue of 5.1 percent year-on-year.

"The nation's telecom industry is expected to continue stable growth in the coming months despite the ongoing trade friction between the US and China," said Xiang Ligang, a telecom industry expert. "The trade war has in turn strengthened the nation's determination to develop core technologies and encouraged telecom operators and equipment makers to make innovations," he added.

Driven by such innovations, major telecom operators also reported solid profit growth in the first quarter of this year.