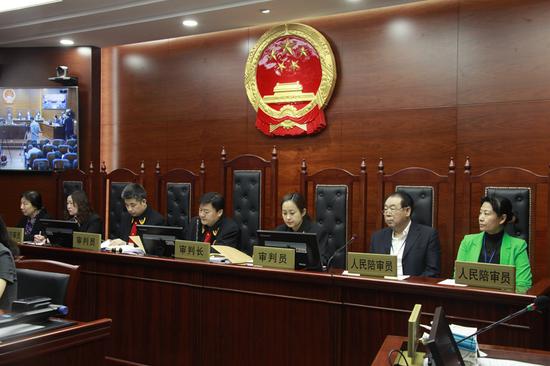 Diao Quangui (second from right) hears an air pollution case with three other people's assessors and three judges at Beijing No 4 Intermediate People's Court on May 8. (Photo/China Daily)

Retired primary schoolteacher Diao Quangui witnessed two legal landmarks after taking his seat at the front of Beijing No 4 Intermediate People's Court on May 8.

Not only did he see the first public-interest lawsuit brought by prosecutors against a company over air pollution, but as a people's assessor he was also part of the first seven-person bench to hear a case since a major change in the law.

People's assessors-members of the public who assist judges and evaluate evidence-have been part of China's justice system since the 1930s, albeit with limited powers, and mostly as part of three-person benches to hear civil disputes or cases of low-level crime.

However, their role was significantly expanded when the People's Assessors Law came into effect on April 27.

To increase public involvement, the law now allows assessors to be part of seven-person benches and take part in a wider range of cases, namely public-interest lawsuits, which often focus on polluting companies, disputes over home demolitions, threats to food or drug safety and criminal trials in which defendants face at least 10 years in prison or even the death penalty.

Three-person benches-made up of either one judge and two assessors or two judges and one assessor-will continue to be used in some trials, with assessors now given almost the same powers as judges, according to the revised law.

The four who will serve on seven-person benches will have more weight when questioning lawyers and defendants and examining physical evidence, but will have no say on final judgments or sentencing.

On May 8, Diao was part of the bench that heard the public-interest lawsuit against Duocai Lianyi Co.

The Beijing paint company was eventually ordered to pay 890,000 yuan ($138,900) in damages and make a public apology for failing to control its emissions and affecting the capital's air quality.

"The law change has definitely had an effect. I felt my opinion carried more weight during the hearing," said the 64-year-old assessor, who has been involved in about 30 cases at Beijing No 4 Intermediate People's Court over the past two years.

"The facts of the pollution case weren't complicated because I take a keen interest in environmental protection in my daily life," he said. "Our job was to see whether Duocai knew it was causing pollution. I asked the company's lawyer how far its factory was from the nearest community, as I think an industrial enterprise should take that into consideration before setting up a potentially polluting operation."

Every question and comment from the assessors was included in the court records.

During the pilot program to try out the larger bench, which lasted from 2015 to 2018, courts were encouraged to come up with ways to increase diversity among assessors and find what kind of bench would suit various trials or disputes.

Ma Jun, the chief judge in the Duocai lawsuit, welcomed the law change, saying the seven-person bench could ensure judges hear more and different voices from ordinary people, and help make rulings fairer by taking both their legal effect and their social effect into account.

"Although the questions raised by the four assessors during the hearing were straightforward and simple, it gave us (the judges) a better impression of what ordinary people think when talking about environmental issues," Ma said. "The greater involvement of the assessors will shorten the distance between our judicial work and the public."

Their average age is around 40 and most were recommended by work units, communities and social associations, according to the court, which said they have attended 660 case hearings since the beginning of last year.

Zhou Guangquan, a law professor at Tsinghua University who took part in drafting the revisions to the People's Assessors Law, said the involvement of more ordinary people will diversify benches, and they will be also closer to and better understand justice if the revised law is implemented effectively.

Although some have compared people's assessors in China with jurors in Western countries, that comparison is not suitable, he said, "as China has its own judicial system and reality".

Qin Shuo, a judge at Beijing Haidian District People's Court, which sits on the lowest rung of the city's court system and handles many disputes every year, said assessors are more like observers or public supervisors.

"They are more helpful in trying the facts of a case," she said. "Some of them are confused or hesitant to say what law should be applied and what conviction a man should be given, although they are permitted to comment on such things in a three-person bench."

Diao said he is always prudent in offering views on matters of law. "I'm confident with my social experience and educational knowledge that could be a supplement for judges in reviewing the facts of a case, but as for laws, I have to believe in the judges," he said.

Lu Youcai, 71, a retired factory worker who has been a people's assessor with Haidian district court for more than two decades, said he is not afraid to comment on the evidence and whether he feels a defendant is guilty or not.

He once had a completely opposite opinion to a judge on whether a man was guilty in 2015.

"I didn't think the man's behavior met the crime of embezzlement after reviewing the facts and evidence of the case, so I said I thought he was innocent at the end of the trial," Lu said, adding that the defendant was convicted on a majority decision.

Jiang Nan, 31, a district court judge, said a judge is more like a guide in a three-person bench, adding that she prefers that size of bench because assessors' opinions can sometimes prevent judges from going up a "blind alley".

People's assessors are drawn from ordinary citizens and know more about their thinking in a dispute, she said, and that can help judges better understand the facts of a case and then make accurate rulings.

"For example, when judges-especially younger ones like me-hear about someone in a company making false accounts, we're more likely to think he or she has done it to cheat the company out of money and will identify it as fraud," Jiang said. "But in reality, the behavior of faking accounts may happen for many reasons that we are unaware of due to our lack of social experience. This part can be supplied by our assessors."

Haidian district court has the most assessors of any court in the city, as it has to deal with more than 100,000 cases a year. The average age of its 666 assessors is around 45, and they are largely drawn from community workers, financial and medical workers, and college teachers.

Li Wenyun, a village committee official in Sanxingzhuang, about 30 kilometers from downtown Beijing, has been a Haidian court assessor for about two years. She said her background as a village official gives her a sense of achievement when hearing domestic cases, such as divorces and family property settlements.

"Compared with judges, I'm more familiar with and can understand more accurately what ordinary people, especially villagers, are thinking, why they argue with each other and how they want to solve disputes because mediating conflicts is a major part of my day-to-day work," Li, 41, said.

"My practical advice and solutions are contributions to help prevent judges who only focus on laws from aggravating conflicts.

"Meanwhile, being an assessor also improves my legal awareness, and that helps in my own job."

Early this year, for example, Li took part in a hearing in which a man in his 60s was sentenced to seven months in prison for indecent acts targeting boys.

"Thanks to the trial, I found some behaviors I thought right were actually wrong," she said. "Lots of villagers, including me, thought acting indecently toward girls wasn't suitable, but touching boys' genitals was more like making fun.

"But after the case, I realized the behavior is a crime, no matter whether it's toward girls or boys.

"I told other villagers about the judgment, and based on that, I popularized related parts of the Criminal Law."

Most assessors, including Diao, Lu and Li, were recommended by their employer, communities or social associations, but the law now says more than 80 percent of assessors should be selected randomly. They will have five-year terms and, generally, will not be able to serve for consecutive terms.

The Ministry of Justice, the Supreme People's Court and the Ministry of Public Security are jointly drawing up a specific regulation on how to run the random selection. It is expected to be unveiled by the end of the year.

Zhou, who helped draft the law, said a scientific and diversified selection process is important.

In addition, he said, further study is needed on how to ensure those selected, including people with jobs, can be motivated to take part in case hearings, because no one can be forced to be an assessor.

Most assessors have jobs and they come from all walks of life. They are not compelled to attend a particular hearing, but those unable to be present should explain the reasons for their absence to the court.

However, the law does specify the situations that are acceptable when asking for leave.

Assessors generally attend a hearing for about half a day each time they are randomly selected to attend a trial.

More serious or complicated cases may last a whole day or longer, but most common civil or criminal cases would be unlikely to tie up an assessor for more than two to three hours.

Assessors do not receive pay, but they can get money toward food and travel if they attend case hearings.

The revised law also prohibits employers from cutting the salaries of assessors who have to leave their jobs to attend hearings.

Li Mei, a Beijing civil lawyer, said she looks forward to seeing more diversity among assessors after the specific rule is issued, but she is concerned about how the five-year term might affect current assessors.

How to ensure the quality or professionalism of assessors is also a concern for lawyers. Liu Yuxiang, another Beijing lawyer, said many assessors seldom voiced their opinions or even spoke at all during trials because they were unaware of the issues of the case.

If they cannot exercise power in their position, it will be a waste of legal resources and time, she added.

"I was sometimes lost in trials," Diao said. "I attended the hearing of a financial dispute, but I couldn't follow it and was confused with the relationship among litigants after a trial lasting several hours, as I knew nothing about finance."

Pang Zhengzhong, deputy head of the Beijing Lawyers Association, suggested courts set up a think tank to improve the quality of hearings, because it was hard to ensure the professionalism of randomly selected assessors.

"But the think tank could be some time away," he added.