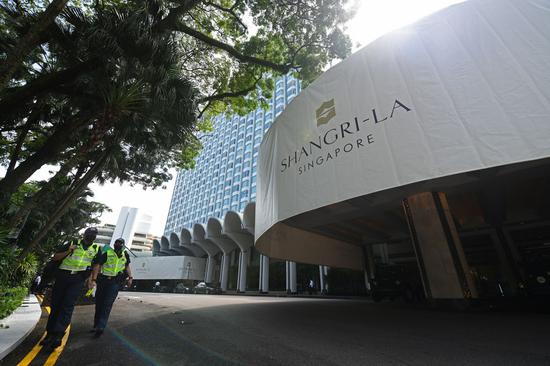 Policemen carry out their duties for the 19th Shangri-La Dialogue in Singapore on June 10, 2022. (Photo by Then Chih Wey/Xinhua)

The 19th Shangri-La Dialogue, a premier defense and security summit in the Asia-Pacific region, concluded here on Sunday, with many delegates recognizing peace and development as common goals while urging dialogue and cooperation to maintain regional and global stability.

Meanwhile, they cautioned against geopolitical strategies that bring division, instigate confrontation and undermine peace in the region, adding that any attempt to divide countries is doomed to fail.

The Global Security Initiative (GSI) proposed by China is another global public good, injecting confidence in global security and demonstrating China's commitment as a major country to upholding world peace and stability.

The world is facing multiple crises rarely seen in history. The way forward is to uphold and practice multilateralism and build a community with a shared future for mankind, said Chinese State Councilor and Defense Minister Wei Fenghe.

Noting that the Asia-Pacific is the world's most vibrant and promising economic powerhouse, Wei urged countries to strive for the bright prospect of building an Asia-Pacific community with a shared future that enjoys durable peace and provides security for all.

In a world blanketed with populist decisions, with an eye only on the next election, Hussein said it is vital to think about a more peaceful and stable future.

The GSI has won high praise from experts. Woo Su-keun, director at the Institute of East Asian Studies of Korea, told Xinhua that the GSI is rich in content and highly relevant in upholding a vision for maintaining global peace and security.

Woo said the GSI is in line with China's vision of building a community with a shared future for humanity, adding that it emphasizes win-win cooperation and support for genuine multilateralism and offers Chinese solutions to jointly safeguard world peace.

"China has been playing a more important role in safeguarding global and regional peace and stability," he said.

Chen Gang, assistant director of the East Asian Institute of the National University of Singapore, said that China wants to build a peaceful Asia-Pacific region and reiterated its promise on no-first-use of nuclear weapons at the summit, which is of significant importance, particularly in the current backdrop of growing nuclear threats.

Under the GSI, China calls for establishing a community of security in the Asia-Pacific region, which is entirely different from the U.S. Indo-Pacific strategy that seeks to form exclusive blocs to counter China, Chen said.

Gu Qingyang, an associate professor at the Lee Kuan Yew School of Public Policy of the National University of Singapore, told Xinhua that Wei's remarks emphasize solidarity and cooperation.

Gu said China is an important contributor to world peace, playing a crucial role in fighting the COVID-19 epidemic and stimulating a global economic recovery.

During this year's dialogue, delegates urged countries to carry out security cooperation, with the interests of all parties guaranteed.

On Sunday, Singaporean Defense Minister Ng Eng Hen said that the world stands at a potentially dangerous point in history. Ng said Asia desires a regional inter-dependency that is productive and mutually beneficial.

Gu noted that many delegates from developing countries have expressed hope for peaceful development in the region rather than conflict.

Seun Sam, a policy analyst at the Royal Academy of Cambodia, said China believes in peaceful development and win-win cooperation. "China does not only want to grow alone but also wants other countries to grow with it."

Woo said a Cold War mentality featuring opposing camps must be abandoned, and each country's circumstances should be considered. The right of each country to choose its own development path should be fully respected.

Although U.S. Secretary of Defense Lloyd Austin claims that the so-called Indo-Pacific strategy would promote freedom, openness and prosperity in the region, many senior officials and analysts believe that it would stir up tensions instead and cause regional conflicts, all in an effort to contain China's development.

Many officials and experts criticized the Indo-Pacific strategy for attempting to divide the region.

China believes that any regional strategy should bolster regional peace, stability and the shared interests of all, Wei sad.

"Its true intention is to use this strategy to maintain the U.S.' hegemonic system," said Lieutenant General Zhang Zhenzhong, deputy chief of the Joint Staff Department of China's Central Military Commission.

It is a strategy that causes division, instigates confrontation and undermines peace in the Asia-Pacific region, Zhang said. "The U.S. Indo-Pacific strategy is a strategy that goes against historical trends and prevailing will of regional countries. It only serves the U.S. own interests and therefore is doomed to failure."

Gu said that the purposes of the U.S. Indo-Pacific strategy are to maintain its own hegemonic interests and cover up its intention to start a new Cold War.

The United States would use the strategy to throw the Asia-Pacific region into a geopolitical conflict, destroying China's chances for a peaceful rise, said Gu.

Indonesian Defense Minister Prabowo Subianto called for an Asian approach to resolving challenges in the region, saying that "each country has their own way of solving their problems, but each country has to maintain good relations with their neighbors" and with all the major countries of the world, noting "the question here is that we must always consider and respect the national interests and rights."

Prabowo said countries should respect China's rise. "We have some differences. We will strive to solve those differences in an amicable and in a mutually beneficial way. That is the Asian way."

Joseph Matthews, senior professor at the BELTEI International University in Phnom Penh, said U.S. strategy in the region directly threatens the centrality of the Association of Southeast Asian Nations (ASEAN).

The so-called Indo-Pacific Economic Framework, initiated by the United States, aims to counter China's influence in the region by unsettling ASEAN, he said.