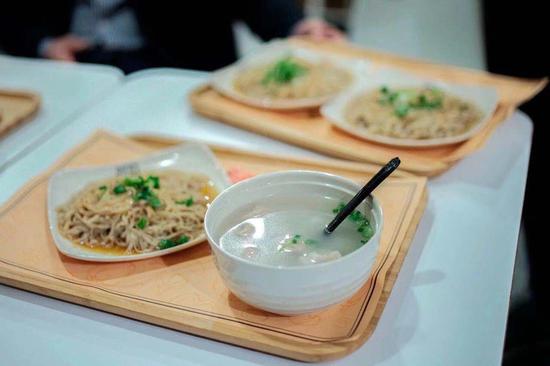 China's restaurant chain serving Shaxian County cuisine has opened its first eatery in the United States in October but closed three hours after it was officially opened to the public as all the dishes on the menu were sold out.

Originating in Shaxian County, east China's Fujian Province, the Shaxian Delicacies restaurant chain has already become a great success in China, presenting customers with traditional snacks, such as peanut butter noodles and pork wontons. Their recipes originated from more than 1,000 years ago, and spread as locals left their hometown afar for work.

Now, these snacks have hit the streets of New York City and captured local taste buds.

The newly opened restaurant located at 818, 60th St. Brooklyn. In the past month, the restaurant has received an order every two minutes during busy hours.

"It is amazing that the Shaxian Delicacies can open its eatery near my house in America. The flavors of the food here are just the same as I remember," said Ms Zheng, who was born in Fuzhou City, the capital of Fujian Province.

To create a clean and brightly-lit environment, the owner of the Shaxian Delicacies eatery in New York, Shao Binfang, a 34-year-old Chinese American born in Fuzhou, designed an open kitchen in her restaurant.

"When the customers can see the cooking process, it puts them at ease over food safety," said Shao.

Early this year, the company set up its first overseas chain-eatery at Takadanobaba Station in Tokyo, Japan. And the store reportedly made 200,000 yen (about 11,950 yuan) in just five hours after its opening. As of the end of September, the 80-square-meter restaurant has sold around 5 million yen (about 44,563 USD) monthly.

The industry development center of the brand claimed that over 10 countries including the United States, Britain, Argentina, Australia and Canada, have shown interest in having the chain.

To adapt to the taste of foreigners, the Shaxian Delicacies has not only maintained the traditional production skills, but also made improvements.

And to distribute semi-finished products to its franchises worldwide, the Shaxian County is building a "central kitchen."

"A basket of steamed dumplings for 50 cents, delicious but not expensive, that's my childhood memories of the Shaxian snacks. After I grew up, these snacks represent the diligent spirit of people from Fujian Province," said Lin Liju, investor of the Shaxian Delicacies.

With its good quality and competitive price, the Shaxian Delicacies has become a local pillar industry which creates a turnover of over 10 billion yuan (1.44 billion U.S. dollars) annually.

"In my childhood, food stalls could be seen everywhere in my hometown in Fuzhou. But this is just a small step for the company, the Shaxian Delicacies, in going global," said Ms Shao.

The Shaxian Delicacies is not the only case where cheap and quick Chinese snacks are loved by foreigners.

Brian Goldberg, the owner of Mr. Bing's, one of the first Jianbing stands in New York City, ate Jianbing for breakfast when he studied Mandarin in China 20 years ago. Goldberg loved this flap Chinese crepe so much that he brought it to America.

And a traditional dish of central China's Wuhan City, the hot-dry noodle, has been taken to Italy by a couple who opened a restaurant in Florence. The dish has become very popular to have attracted many local diners.