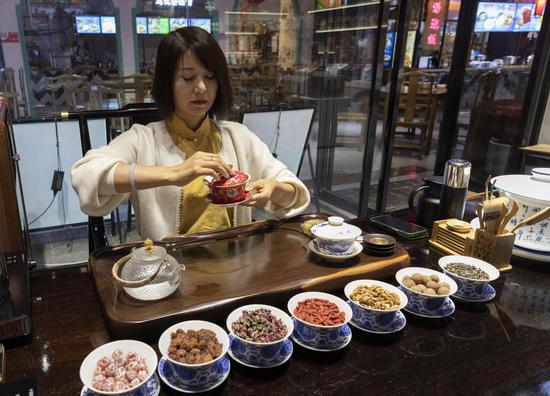 Eight Treasures Tea, or Babao Tea in Chinese, is a traditional Chinese herbal tea with a history of thousands of years. It was invented along the ancient Silk Road during the heyday of the Tang Dynasty (618-907). At the time, merchants from different ethnic groups shared local specialties and brewed them into tea, used to relieve travel fatigue or as a gift for making new friends.

It's called “Eight Treasures" because it has eight ingredients, normally, tea leaves, red dates, longan, wolfberries, Russian olives, walnuts, sesame and rock sugar, though the ingredients may vary by region.

"I remember my grandfather and father making tea ever since I was young," said Ma. "I don't want the tea culture to be forgotten."

Traditional Babao tea is produced and packed manually in workshops. However, in order to better promote it, Ma realized mass production by applying standardized methods.

In the production process, she has not only preserved the old formula and taste but also developed some new flavors that are more popular with young consumers.

"We have added many new ingredients to Babao tea, such as Malva nuts, golden-and-silver honeysuckle, and Roselle, which girls like very much," said Ma.

These kinds of flowers and fruit-flavored Babao tea are very popular with young people, she added.

She has been making Babao tea-related videos on social media to popularize it.

Today, Babao tea has been introduced to overseas markets and gained a good reputation. "Actually, tea consumed in Europe, Southeast Asia, the Middle East and other places are similar to Babao tea. But they seldom see a tea with such rich ingredients, so they like Babao tea," said Ding Tao, chairman of Ningxia Babao Tea Industry Association.

In recent years, Ningxia Babao tea has been well received at international exhibitions, gradually opening up the international market and gaining recognition from overseas consumers, he added.