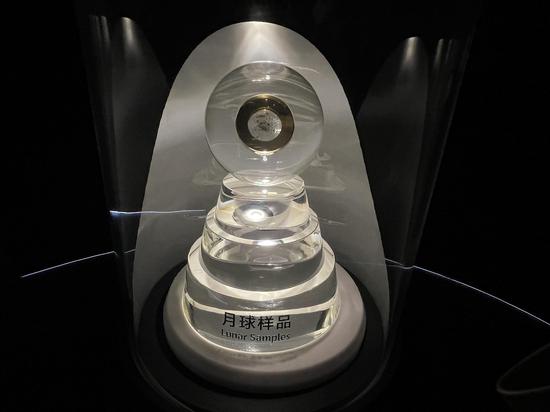 The CAS released its latest research results of the lunar samples, which suggests they are a new class of basalt and the youngest to be dated, at around two billion years old.

Lunar basalt, unlike magnesium- and iron-rich basalt found on Earth, is low in magnesium and high in iron oxide, according to the results.

The research shed light on the thermal and chemical evolution of the Moon and its volcanic activities.

Researchers have also found that the parent magma of Chang'e-5 lunar basalt contained less water than previous lunar samples, an estimated maximum mantle water abundance of 1-5 μg per gram, suggesting the Moon's youngest volcanism was not driven by abundant water in its mantle source.

"These samples will open an epoch-making window for studying lunar science. We've already found that the Moon is so vast and more heterogenous than we thought, so more missions to collect samples should be scheduled," said Li Chunlai, a researcher at the National Astronomical Observatories of the Chinese Academy of Sciences (NAOC).

China and France will carry out complementary cooperation in the form of personnel exchanges and joint research projects, according to the conference.

In the future, the CAS will continue to strengthen exchanges and cooperation with the international scientific community in lunar sample research.

On Dec. 17, 2020, China's Chang'e-5 mission successfully brought back around 1.73 kilograms of moon soil and rocks to Earth - the first samples collected from the Moon since 1976. In July 2021, China National Space Administration (CNSA) officially distributed the first batch of lunar samples, about 17.5 grams, to 13 Chinese research institutions.