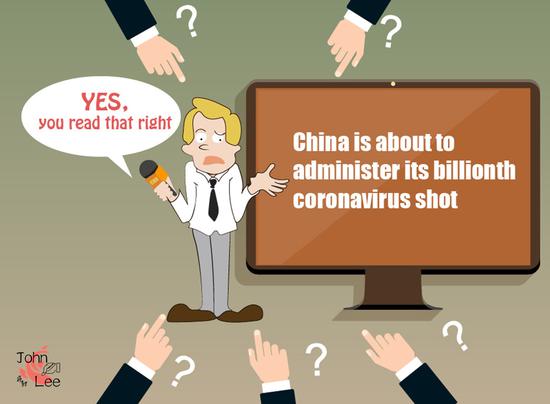 (ECNS) -- U.S. Cable News Network (CNN) was surprised by China's coronavirus vaccination rates, calling it "a scale and speed unrivaled by any other country in the world" in its report "China is about to administer its billionth coronavirus shot" last Friday. Fox News cited a commentary by NewsBusters analyst Nicholas Fondacaro, who labeled CNN as "China News Network pumping out propaganda for the CCP." A fact report on China was interpreted as "pro-China propaganda", showing some people in the U.S. and other Western countries had played a double-standard trick on China once again.

In fact, this is not the first time that they have practiced double standards on China issues. Previously, some U.S. media including CNN romanticized the rocket debris of SpaceX as "lighting up the sky with a spectacular rocket show", while coordinately stating China's rocket debris would "cause threats to objects on Earth". This time, CNN's report on China's vaccination speed was called "running Chinese propaganda for the CCP", with even Chinese statistics brought into doubt. It is nothing but their prejudice against China's development that sees lies flattered while facts are questioned and ridiculed.

It is an established fact that China has administered more than one billion doses of the COVID vaccine. Some U.S media shout for press freedom, but can't stop satirizing and questioning objective China-related reports, which is no doubt "sour grapes psychology." Does their press freedom mean unlimited freedom in attacking and smearing China?

China's achievements in fighting COVID-19 won't be effaced despite their slander. Statistics released by National Health Commission on Sunday shows more than one billion vaccines have been administered across China as of Saturday, which is definitely true and reliable. Therefore, U.S. media should give up their double-standard related to China, abide by news facts and professional ethics and report on China in a fair and objective way.