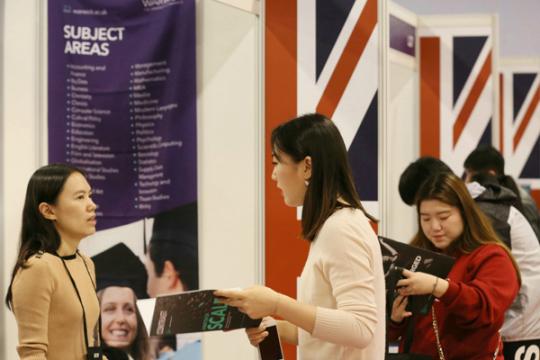 A visitor consults at the UK counter at China Education Expo in Beijing in October 2017. (Photo provided to China Daily)

Pandemic situation influences choice, along with friendliness toward China

Most Chinese students studying at overseas universities or planning to do so remain keen on foreign study despite the impact of the COVID-19 pandemic, a new report showed.

Ninety-one percent of prospective Chinese overseas students said they still plan to study abroad, while 92 percent of existing overseas students plan to return to their schools abroad in the near future, according to the annual Report on Chinese Students' Overseas Study, which was released recently.

The report was based on a survey conducted in January and February by Vision Overseas Consulting, a subsidiary of New Oriental Education and Technology Group, and consultancy Kantar. It surveyed 7,893 prospective and existing Chinese overseas students.

Safety was ranked the third-most-important factor for undergraduate students this year, down from second last year. However, it only ranked seventh in 2019, the report said.

It also found that fewer parents are willing to let their children study abroad before graduating university.

Sun Tao, president of Vision Overseas Consulting, said the main reason most Chinese students have not given up overseas study plans is that it is an expensive decision that also takes years of preparation.

The Vision Overseas Consulting report also found that the United Kingdom remained the most popular destination for Chinese students pursuing overseas study for a second consecutive year, with the United States again in second place.

The UK was preferred by 44 percent of respondents this year, up by 2 percentage points from last year.

Thirty-two percent of students expressed a preference for studying in the US this year, down 5 percentage points from last year.

Canada and Japan tied for the third-most-popular destination, with 15 percent each, followed by Hong Kong, Australia and Singapore, the report found. Australia has fallen from third place last year to sixth place this year.

The Ministry of Education warned Chinese nationals of the risks of pursuing studies in the US last year due to visa restrictions. It also warned students against studying in Australia last year and this year, citing incidents of discrimination and multiple assaults against Chinese students.

Guo Kaidong, 24, a first-year PhD candidate at University College London, said he plans to return to the UK in September after taking online courses at home since October.

"It gets very boring after a while, and it is easy to lose focus on my studies," he said, adding he is not so concerned about the pandemic in the UK but will get vaccinated against COVID-19 before returning to the country.