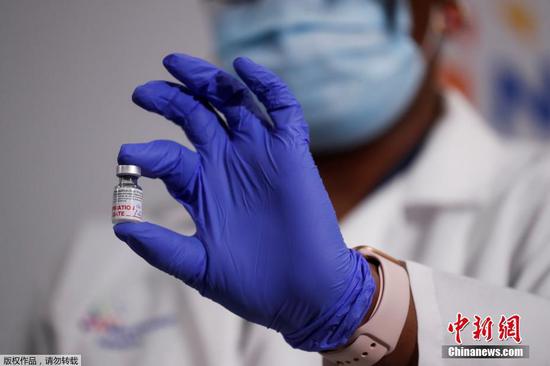 Photo shows a nurse presents the vaccine on January 4, 2021. Sandra Lindsay, a nurse who is also the first person in the U.S. to receive COVID-19 vaccine, got her second dose at Long Island Jewish Medical Center, New York. (Photo/Agencies)

(ECNS) -- Last month, U.S. President Joe Biden announced the U.S. would share 80 million spare vaccines with the globe. However, the White House has yet to take real action to fulfill its promise.

While over half of the American people had received at least one dose of the vaccine by the end of May, the U.S. government has not made a clear schedule of which regions and nations would receive the shared batch. Besides, 60 million shared vaccines produced by AstraZeneca have not been authorized by the United States Food and Drug Administration (FDA).

Even though Biden claimed the U.S. would be the arsenal of vaccines for the rest of the world, the promise seems to be a public relations in response to urgent global demand. While stockpiling vaccines, it sets a premise that guarantees Americans get enough vaccines first. It is simply sending a seemingly friendly signal to the world yet without any concrete schedule.

To the U.S. government's delayed response, World Bank President David Malpass said Tuesday "these next few weeks are vital that in particular the U.S. frees up excess (vaccines) to go to programs that exist".

A vaccine arsenal would better aid regions and countries that need help to overcome the pandemic crisis. Early herd immunity across the world through vaccination will be an effect way to fight the pandemic. The world should join together and support each other against the virus, our common enemy. The U.S. government should provide practical plans on sharing vaccines and do its duty as a major power in fighting COVID-19, instead of making empty promises.