A train schedule map from Japan speaks for 'China speed' 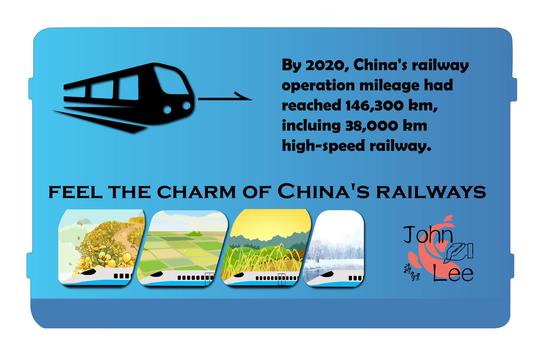 Feel the charm of China's railways. (Picture by Yao Lan)

(ECNS) -- A concise China train schedule map that epitomizes China's railway network released by a Japan-based nonprofit organization on Sunday became a hit on the Internet. Some Japanese net users praised it as very convenient.

This informative timetable illustrates China's sweeping development speed and ability since the reform and opening up. China's railway operating mileage has reached 146,300 kilometers, ranking second in the world. Among them, the high-speed railway mileage is 38,000 kilometers, ranking first in the world. China has seen a galloping technological advancement in railways from slow trains at a speed of tens of kilometers per hour to bullet trains at hundreds of kilometers per hour, and to maglev trains and a series of China-Europe freight trains. The country's railway technologies and equipment are going global. A high-speed rail construction and equipment manufacturing system with independent intellectual property rights has already been formed in China.

As the main artery of the national economy, railways play an important role in boosting economic development. Turning deep chasms into thoroughfares, the Chinese railway has impressed the world with its speed. The locomotive of the "artery" will continue to rush forward, driving the development of both China's and the world’s economies.