Cooperation or confrontation: Can Europe make the right choice? 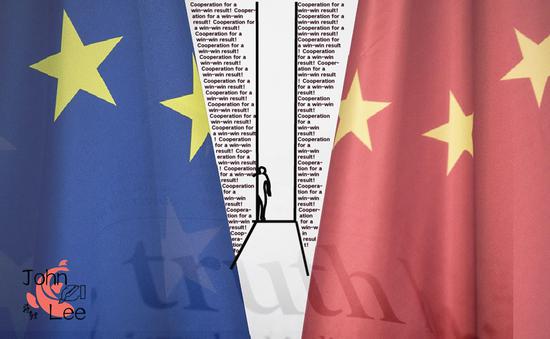 Cooperation or confrontation? Can Europe make the right choice? (Picture by Yao Lan)

(ECNS) -- Mick Wallace, a member of the European Parliament from Ireland on Wednesday tweeted a video in which he spoke highly of China's achievements in terms of poverty alleviation, climate mitigation, anti-COVID-19 fight, etc. Meanwhile, he questioned why EU politicians would rather choose confrontation than cooperation?

The U.S. has been cracking down on China under the pretext of human rights and national security issues in recent years, sanctioning Chinese enterprises and hyping human rights issues in Xinjiang Uyghur Autonomous Region. There is no doubt the country has taxed its ingenuity. Some European countries also act in collusion to impede China's development. Countries like Sweden and Britain followed the U.S. to ban Huawei 5G equipment. The EU, in coordination with the U.S., sanctioned China over the so-called "genocide" in Xinjiang. Such facts show some European countries turn a blind eye to the truth and would rather be led by the nose.

Wallace is sober on Europe's relationship with China and evaluating the country's development achievements. China's development has brought opportunities rather than threats to the world. Confronting China is not in the interest of European countries. We hope that there would be more people like Wallace in Europe who understand the current situation and advocate for cooperation with China for a win-win result. On the contrary, holding to zero-sum thinking and confrontation could only lead to a loss for both sides.