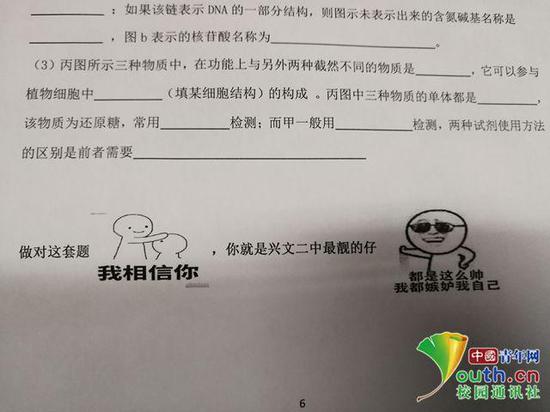 One meme image (L) shows a caring figure comforting a frustrated figure, accompanied by the Chinese characters for "I believe in you." (Photo/Youth.cn)

(ECNS) -- Homework during the holidays can be a fun-killer for many students, but a biology teacher in Sichuan Province has made it less boring by using a secret weapon – meme images, commonly used on social media to express certain feelings.

When students from a class at No.2 High School in Xingwen County were given a test paper on cellular biology and DNA, to be completed during their school holiday, they were surprised to find some additional embellishments on the paper.

One meme image shows a caring figure comforting a frustrated figure, accompanied by the Chinese characters for "I believe in you." In other images, a guy in black sunglasses poses confidently, and a smiling girl shouts “Beat me if you can,” followed by the message: "So easy!!!" 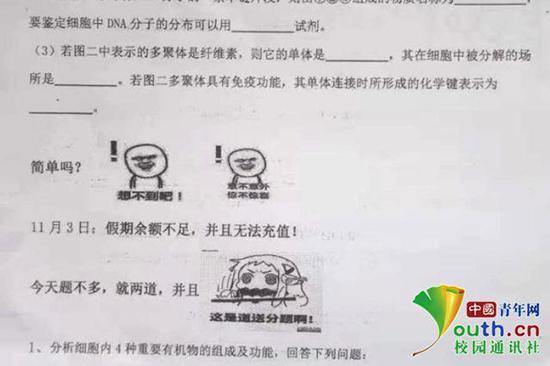 Sun Yang, a student from the class, said he hates having to do homework during holidays but found this test paper to be more interesting than usual.

Many students in his class gave the new test design a thumbs-up, Sun said.

Wen Yi, the teacher, said she hopes her fun design will help reduce anxiety among her students and stimulate their interest in learning.

"Students are curious about new things, so it's always a question for teachers to think how to make studying less tedious," Wen said.

However, she said she didn't think she'd be putting the meme images in a real test paper for now.