Chinese photographer Liao Jianhui was named the overall winner of the Food Photographer of the Year 2019 contest for Cauldron Noodles. (Photo/CHINA DAILY)

In 1988, Yang Shaoming was the first Chinese photographer to clinch a World Press Photo award, from a nonprofit organization based in the Netherlands. Yang's achievement has since paved the way for Chinese photographers to feature prominently at prestigious international competitions.

Bao Yongqing is the latest in the lineup, receiving international coverage last month after he was named Wildlife Photographer of the Year 2019 by London's Natural History Museum, which had organized the major competition. The winning photo, The Moment, captures a standoff between a Tibetan fox and a marmot in China's Qilian Mountains.

"To win the award was not my purpose, but of course I am more than happy to get it," Bao said. "My main purpose is to get people to know more about wild animals, to love them and protect them."

In May, Liao Jianhui also drew global attention when he was named the 2019 Food Photographer of the Year. The award, established by Caroline Kenyon, director of The Food Awards Co in the United Kingdom, supports Action Against Hunger, a humanitarian aid organization that specializes in saving the lives of malnourished children in the world's poorest countries.

Marine Cabos-Brulle, an art historian and founder of the Photography of China platform, which aims to offer a perspective of China and history through the eyes of people who love photographs, said the rise in the number of Chinese photographers on the global stage has been noticeable, particularly in the growing number of "specialized fairs, photography festivals, and institutions which have endeavored to offer an international platform for Chinese contemporary photography".

Shanghai alone has been a hub of visual art and photography. The city holds the annual Photofairs Shanghai, which is regarded as a leading destination in the Asia-Pacific for discovering and collecting photography from the emerging to the iconic. Photo enthusiasts also flock to the Pingyao International Photography Festival in Shanxi province, which features hundreds of exhibits and works from around the world.

Cabos-Brulle said the Lianzhou Museum of Photography, which opened in 2017, is the first public museum of its kind dedicated to contemporary photography in China, and it highlights the cross-cultural venture between its two founders, Francois Cheval, a French photographic exhibition curator, and Duan Yuting of China, founder of the Lianzhou Foto Festival. Founded in 2005 in Lianzhou, a town in the southern Chinese province of Guangdong, the festival has become known as one of the leading photography events in the country. 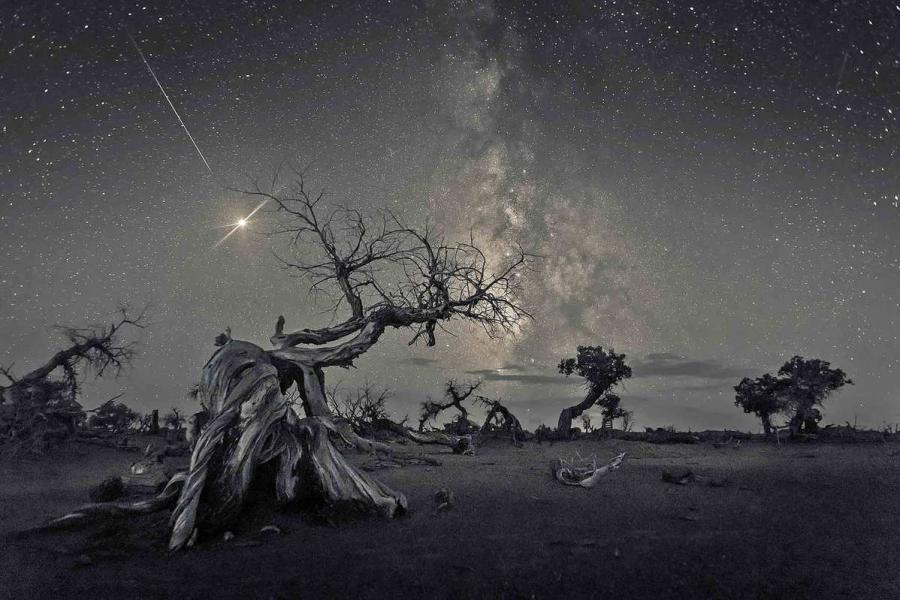 Wang Zheng won in the Skyscapes category of the Astronomy Photographer of the Year accolade with his image. (Photo/CHINA DAILY)

Behind some of the winning images are Chinese organizations that help photographers to participate in international competitions, she said.

Caroline Kenyon believes there is now an ecosystem for Chinese photography, which is now considered an art form.

The Food Photographer of the Year competition aims to tell the whole story of food and how "it touches our lives in every single way".

"The potential is vast. What I've seen in the Chinese entries is the talent in capturing a moment with perfect timing," Kenyon said. vChina's photography industry has been making steady progress in recent times, with more Chinese photographers entering international competitions over the past three to four years compared with the past.

Chris Coe, who is behind the Travel Photography of the Year accolade, said the rise in the number of Chinese photography entrants could be due to the fact that more people from China are now traveling.

"Chinese people are photographing places we've never seen before, so that gives an interesting aspect and a freshness in terms of the subject matter," he said.

He added: "What I'm seeing from China is really exciting and really fresh, and I would love to see more of it. It's an interesting perspective. I would like to see people being creative in capturing images from China."

Dong Shuchang emerged joint winner of the Sir Patrick Moore Prize for Best Newcomer at the Astronomy Photographer of the Year awards for his shot. (Photo/CHINA DAILY)

The many Chinese tourists opting to travel abroad in tour groups has also led to multiple entries of the same image from different photographers, he said.

Wang Zheng's image, Across the Sky of History, won the 2019 Astronomy Photographer of the Year award in the Skyscapes category. Dong Shuchang was joint winner of the Sir Patrick Moore Prize for Best Newcomer for his photograph, Sky and Ground, Stars and Sand.

"Since 2000, we have been living in an increasingly digital age where technology is weaving itself deeper into the fabric of our lives. While this digital age encourages artists globally to embrace new technologies, it also prompts a phenomenon to go back to paper and to analog photography," said Cabos-Brulle. Analog photography refers to photography using an analog camera and film.

"For instance, in China there is currently an endeavour to dig out found photographs. Also, there is a strong interest in late 19th century techniques like wet-collodion among others, which enable creation of unique pieces of work," she said.

Found photography is a genre of photography based on the recovery of lost, unclaimed, or discarded photographs. The wet-collodion process involves taking photographs that uses panes of glass, coated with a chemical solution, as the negative.

Cabos-Brulle said a new generation of Chinese photographers born in the 1980s has developed "an introspective approach to the medium, making works about identity, youth culture, sexual identity, gender politics and broader social issues through a kind of performative attitude".

The Photography of China founder said that focus should also be given to a number of women photographers who have played a key role in highlighting current social issues.

"To name just a few, there is the China-based Singaporean photojournalist Sim Chi Yin and her series The Rat Tribe, which documented residents in small underground rooms in China's most important cities," she said.

"There is also Yan Cong, who has been working on topics such as women's issues, social justice and China's relations with its neighboring countries. Her ongoing series Chongli 2022 won the World Press Photo 6x6 Asia Talent this year."