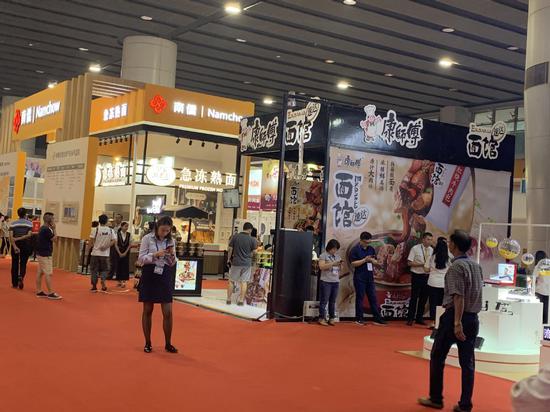 More than 1,000 businesses and organizations from several counties and cities in Taiwan are showcasing their products and services at the ongoing Guangzhou Taiwan Commodities Fair. (Photos provided to chinadaily.com.cn)

The Chinese mainland has worked out favorable investment policies to better help Taiwan entrepreneurs develop in one of the world's biggest markets, a senior leader said on Monday in Nanjing, Jiangsu province.

Wang made the remark while addressing the opening ceremony of the 2019 Cross-Straits Entrepreneurs Zijin Mountain Summit, held in Nanjing on Monday and Tuesday. More than 360 companies from Taiwan and 1,200 companies from the mainland are attending the summit.

They also provide Taiwan residents living on the mainland with more convenience in transportation, housing and evaluation of professional titles.

"The mainland has been Taiwan's largest export market for 18 consecutive years and brought a large surplus to Taiwan," Wang said in the speech. "It is also Taiwan's largest investment destination outside the island, which not only brings huge profits to Taiwan companies but also promotes the transformation and upgrading of Taiwan's economy.

"A survey of Taiwan-funded companies at the beginning of the year showed that 94 percent of them would continue to increase or stabilize their investment on the mainland," he said.

From January to September, the mainland's use of Taiwan capital rose by 40 percent, and many projects with a total investment of more than $1 billion were signed or started construction.

"The mainland was, is and will always be the best choice for Taiwan businesspeople to invest and develop," Wang said.

Siew Wan-chang, honorary chairman of the Taiwan-based Cross-Straits Common Market Foundation, said at the ceremony that the measures will deepen development and establish a joint market between Taiwan and the mainland.

"Despite the global economic turmoil and disputes in the cross-Straits relationship in recent years, we still firmly hold to the established goals and directions, and make efforts to broaden cooperation for companies from across the Straits," Siew said.

"The mainland has put forward the '31 measures' to help Taiwan companies. Many of us have benefited from them, and I believe that the '26 measures' will further improve the investment and living environment of Taiwan companies and people," Lin said.

The "31 measures", unveiled last year, aimed to give Taiwan residents who study and work on the mainland the same treatment as mainland residents.

More than two-thirds of Taiwan's top 100 private companies have invested in Jiangsu. More than 6,300 projects, each with an investment of more than $10 million, have been started in Jiangsu by Taiwan companies, according to the Jiangsu provincial Taiwan affairs office.

Lou Qinjian, Party secretary of Jiangsu, said the province has and will continue to give preferential policies to Taiwan companies to help them develop on the mainland.