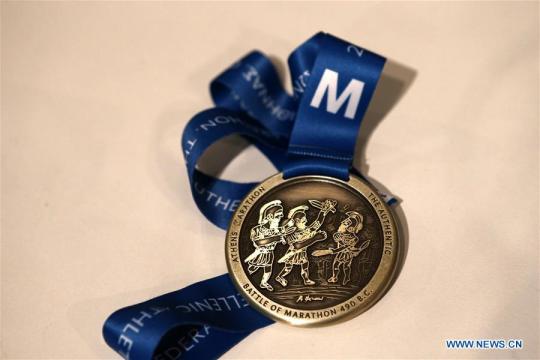 The new medal for the Athens Marathon that Greek painter Alekos Fasianos designed, was presented in Athens, Greece, on Nov 4, 2019. （Photo/Xinhua）

The new medal of the "Athens Marathon, the Authentic" was revealed in Athens on Monday as the city is getting ready to welcome a new record of 60,000 runners from 120 countries and regions in all races on Nov 9 and 10 for the 37th edition.

Every runner who will cross the finish line inside the Panathenaic Stadium, the marble venue of the 1896 first modern Olympic Games, will receive the first medal of a new series, reflecting the history of the Marathon race, organizers said during a press conference.

A total of eight different collective medals, one per year, will be awaiting runners until 2026 for the 130th anniversary of the first modern Marathon race, Kostas Panagopoulos, president of the Hellenic Athletics Federation (SEGAS) said.

This year's medal will depict the Battle of Marathon (490 BC) between Athenians and Persians on one side, designed by Alekos Fasianos, one of the greatest contemporary Greek painters.

Next year, it will be the legendary ancient soldier who first run the 42 km classic route from the Marathon battlefield to Athens, depicted on the medal in a design by Kostas Varotsos, another famous Greek artist.

According to the legend the messenger informed Athenians of the victory (Nenikikamen in ancient Greek- we won) before dying of exhaustion.

The basis of the new medal and the side which will be the same from now on depicting the Panathenaic stadium, was designed by Spyros Kizis, a young industrial designer.

The medal presented on Monday is the result of a two years project with many people involved and the aim is to highlight the cultural aspect of the race and its Greek roots, SEGAS noted.

"Runners know very well that the medal is an object reflecting strong emotions for anyone who is running. It is a memento to keep at home for life," Panagopoulos said, thanking the creators for donating their works.

"They are the most important among our volunteers this year, as well as Mr. Kizis," he said referring to Fasianos and Varotsos.

"We, artists, are trying hard to be part of everyday life. We contribute on our part in this significant event which unites the entire planet in Athens," Varotsos said, speaking on behalf of 84-year-old Fasianos as well.

"During the course the runner doesn't carry only himself, but an entire culture on his shoulders, he carries a message," he added, underlining the cultural aspect of the event.

On his part, Kizas, explained how he came up with the idea of suggesting to update the event's medal.

Five years ago one of his friends participated and we was waiting for him at the finish line.

"There was so much joy and emotion in his eyes. I looked around and everybody, athletes and ordinary people like us, had the same happiness and emotion in their eyes. I had the idea one day looking at his medal which he had left in my office wondering how we could give this medal a more modern style," he told the press conference.

The new medal has diameter 7 centimeters, is made of zinc and weighs about 120 grams. On one side will be engraved the year, the race and the word "FINISHER" and there will be space to engrave the name and time of runner.

Under terms which will be announced in coming days, organizers said, the medal will be available also to collectors in Greece and abroad with the word "COLLECTOR" instead of "FINISHER" engraved.

Each year until 2026 on the medal will be also engraved one letter from the world "MARATHON", giving an extra reason to runners and collectors to rush to get one medal each year, Panagopoulos said.