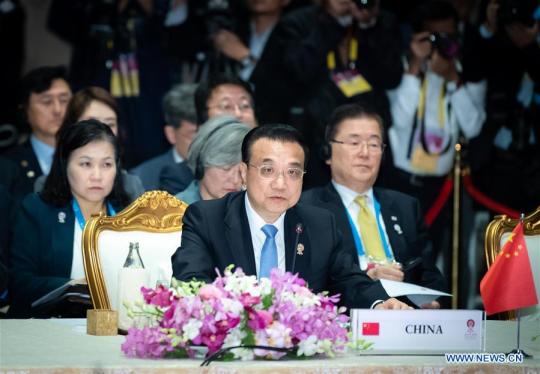 Premier Li Keqiang hailed the advanced progress of negotiations on the Regional Comprehensive Economic Partnership among almost all participating countries as a major breakthrough for the establishment of a free trade zone in East Asia on Monday.

In a speech delivered at the 22nd ASEAN-China, Japan and Republic of Korea leaders' meeting in Bangkok, Li said 15 participating countries of the 16-nation RCEP have essentially concluded all negotiations on market access.

This will be a major breakthrough for the development of an FTZ in East Asia, which will have the most diversified structure of members and the largest growth potential possible, he said.

The trade bloc, once forged, could become the world's largest of its kind, accounting for a third of global gross domestic product and nearly half the world's population.

It will also provide a strong impetus for regional economic integration, safeguard free trade and lift market confidence, Li said. China stands ready to build on the momentum and speed up negotiations on a trilateral free trade agreement between China, Japan and the ROK in working toward the goal of an East Asian economic community, he said.

The signing of the RCEP will be completed next year, said Le Yucheng, vice-minister of foreign affairs, who spoke at a news briefing on Monday.

According to a joint statement released after the third RCEP leaders' meeting on Monday, India still has significant outstanding issues that remain unresolved, and all RCEP-participating countries will work together to resolve these outstanding issues in a mutually satisfactory way.

"We are negotiating an agreement intended to further expand and deepen regional value chains for the benefit of our businesses, including small and medium-sized enterprises, as well as our workers, producers and consumers," the statement read.

The RCEP will significantly boost the region's future growth prospects and contribute positively to the global economy, while serving as a supporting pillar of a strong multilateral trading system and promoting development in economies across the region, it added.

Meeting with US delegates

Li said Beijing and Washington must meet each other halfway to ensure the healthy and stable development of bilateral relations, which also meets the expectations of the international community.

The two sides should follow the consensus of the two presidents and advance bilateral relations featuring coordination, cooperation and stability, he said.

He also urged both sides to respect each other's core interests and major concerns, control differences on the basis of equality and mutual respect and expand cooperation on the basis of mutual benefit and win-win outcomes.

O'Brien said the positive progress from the US-China trade talks is in accord with the interests of both countries and the international community.

The two countries can handle differences in a constructive manner and move their relations forward, he said.