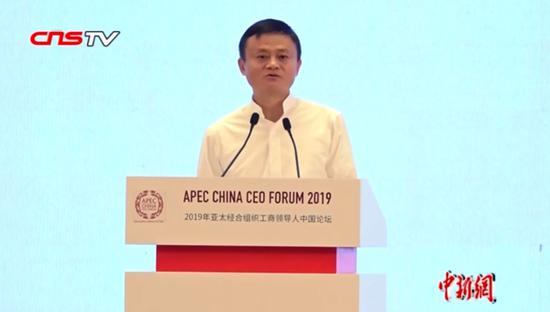 (ECNS) - In future, people will choose to live in locations with data advantages in the same way their ancestors chose to site themselves based on water availability, said Jack Ma, founder and executive chairman of Alibaba Group, at the APEC China CEO Forum 2019.

Today's world is undergoing great change and it’s important to exchange ideas about the digital economy and development of globalization, Ma said at the forum that opened in Hangzhou on Monday.

In praising the important role of trade, he said it should be a symbol of peace and a force to eliminate disputes, rather than a political tool.

Ma said it’s possible the world's biggest cities today may not be the core metropolises of tomorrow amid development of the digital economy.

“People in the past chose to live by the water, so the population is concentrated in places with easier water and land transportation. In future, people will choose places with data convenience,” he explained.

Hangzhou, the headquarters of Alibaba, is one of the first places in China to embrace the digital economy, he said, adding that a mobile phone can be used instead of a wallet to get many things done, such as paying water, electricity or gas bills.