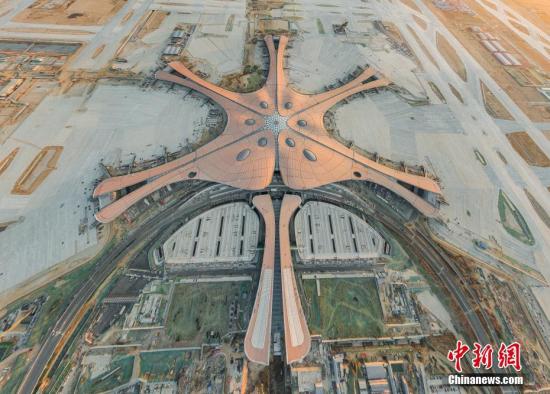 (ECNS) -- With Beijing Daxing International Airport slated to start operation before Sept. 30, a new expressway linking it to the capital’s South Fifth Ring Road is expected to open by the end of this month.

Stretching about 27 kilometers, the two-way, eight-lane expressway has a design speed of 100 to 120 kilometers an hour and mainly consists of elevated bridges that take up about 87 percent of its total length.

The expressway will shorten the drive from South Fifth Ring Road to the new airport to just 20 minutes.

Expansions are planned for the future to connect with other major highways.

The new road is expected to play an important role in promoting development of the airport economic zone as well as the Beijing-Tianjin-Hebei transportation network. It will also serve development of southern Beijing and help ease traffic congestion in that area of the city.

The city has also tested self-driving trains for the subway line connecting its downtown area with the new airport. Beijing Daxing International Airport, located 46 kilometers south of central Beijing, is designed to take pressure off overcrowded Beijing Capital International Airport in the northeastern suburbs. It sits at the junction of Beijing's Daxing District and Langfang, a city in neighboring Hebei Province.