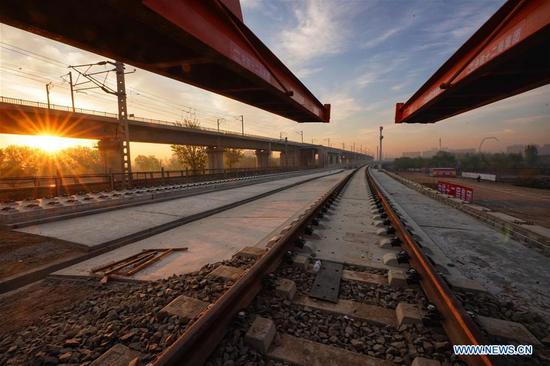 (ECNS) -- China's BeiDou Navigation Satellite System has been used in laying tracks for the Beijing section of an intercity railway linking the capital with Xiongan New Area.

The positioning accuracy of the system has reached 10 meters globally and five meters in the Asia-Pacific region, according to a Xinhua report.

In addition, cameras installed on the front and rear of the track-laying locomotive can provide real-time information, making the whole operation more intelligent.

The intercity railway line, set to be operational by 2020, will be an important link between the urban areas of Beijing, the city’s new airport, and Xiongan New Area.

The Beijing section, connecting Liying Station and Beijing Daxing International Airport, will be ready for service in September, when the airport is also set to open. The section is 33.97 kilometers long and includes three bridges and two tunnels.

In April 2017, China announced the establishment of Xiongan New Area about 100 km southwest of Beijing. A master plan laying out the fundamental guidelines for the development, construction and management of the area was approved in January.